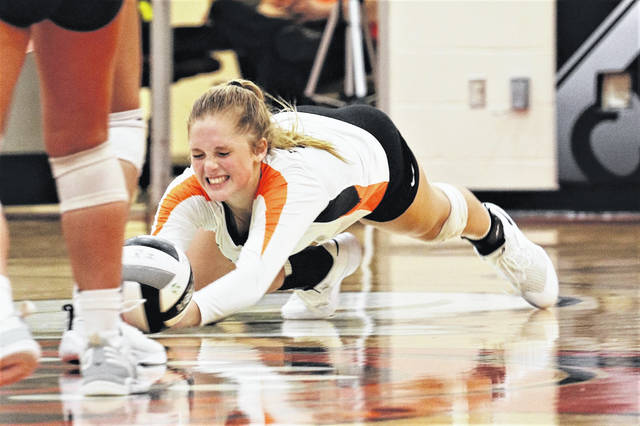 “We definitely came out to play,” Bradford coach, Alisha Patty stated. “They took a hard loss against Franklin Monroe on Tuesday so I knew they would come out and be ready to fire hard.”

Arcanum Jumped out to a 6-1 first set lead before the home team battled back to lead 10-8.

“We were a little slow starting off tonight,” O’Dell stated. “We definitely could have played a little harder.”

The Lady Railroaders grabbed a 14-7 lead to open second set play only to have Arcanum score 6-unanswered points to tail 14-13 bringing a timeout from the Bradford bench.

The final set of the night was played close with the teams tied 23-23, but it was Arcanum scoring the final 2-points to win 25-23 and take the Cross County match by a 3-0 score.

“My girls came out strong,” said Coach Patty. “We missed a couple serves and were just slow on or feet a little bit but I am glad we gave them a run for their money.”

“We pulled it together,” Coach O’Dell said of the win. “The girls stepped up and we got the win.”