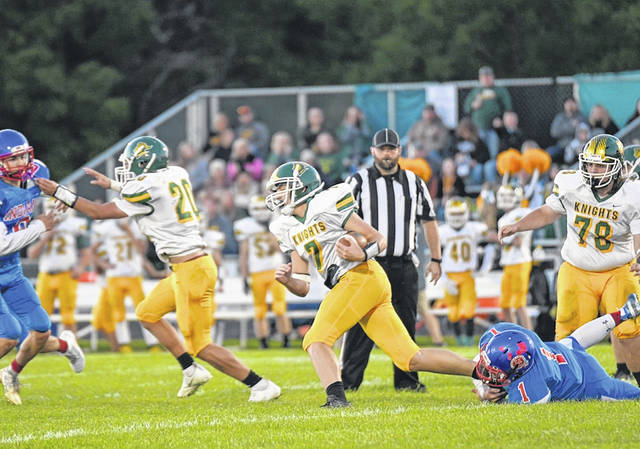 The Knights crossed the end zone with under four minutes to go in the first quarter and then again twice more in the second to take the 18-0 lead at the half.

UC finally was able to put seven on the scoreboard in the third quarter, but that was the final time for the night. Northeastern added six more in the fourth to win the game 24-7.

“We put ourselves in a hole early. The turnovers were hard to overcome,” said UC head coach Keith Maloy.

“We made some halftime adjustments on defense that worked, but we have to do a better job on offense. We threw the ball well, but we just could not finish drives. We will work on it and get better,” added Coach Maloy.

Offensively Union City moved the ball well. Hunter Reagan was 13 of 30 for 167 yards and 1 INT. Rushing the ball Union City had 32 carries for 171 yards.

The 1-3 Indians will look to get back on track next Friday as they travel to Union County for a TEC battle with the 4-1 Patriots.