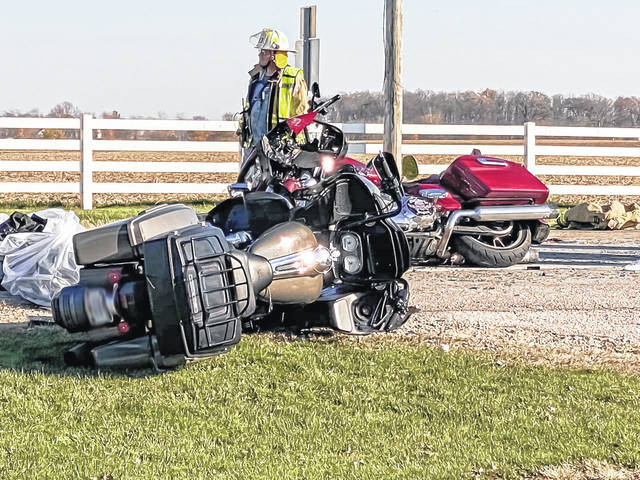 NORTH STAR — Multiple injuries were reported in a Saturday afternoon crash resulting in one motorcyclist being airlifted from the scene and several others being transported to an area hospital.

At approximately 2 p.m., emergency personnel from the Northstar Fire Department, Ansonia Rescue, Osgood Rescue, Versailles Rescue and Miami Valley CareFlight responded along with deputies from the Darke County Sheriff’s Office to the 14400 block of US Route 127 in reference to an injury accident.

According to the Darke County Sheriff’s Office, a preliminary investigation revealed that a northbound 2018 white Dodge Caravan, driven by Christopher Teachout, 35, of Jackson, Mich., was traveling northbound on US Route 127 when it slowed in attempt to turn west into a business drive. Three motorcycles, also northbound on US Route 127, attempted to pass both Mr. Teachout and a semi-tractor and trailer that had stopped in the roadway while the turn was being made.

Teachout’s vehicle was struck by two of the motorcycles, a 2019 gray Harley Davidson Road Glide, driven by Richard Spence, 64, of Somerville, Ohio, and a 2020 red Harley Davidson Road Glide driven by Jason Gravelle, 40, of Cincinnati, Ohio. The third motorcycle, a 2006 black Harley Davidson FLHX, driven by Michael Willhite, 43, of Lawrenceburg, Ind., struck Mr. Gravelle’s motorcycle during the course of the crash. Mr. Willhite was unable to maintain control and his motorcycle was laid down as well. The semi was not struck during the incident and had left the scene before the arrival of first responders.