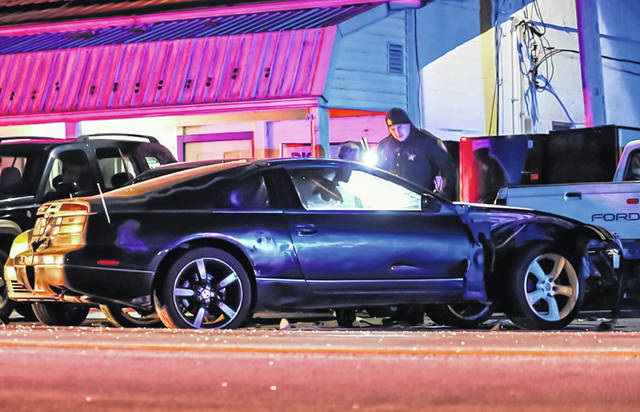 GREENVILLE — Two people were injured Monday evening as a result of a two-vehicle injury crash on the outskirts of Greenville.

At approximately 9:50 p.m., emergency personnel from Greenville Township Fire and Rescue responded along with Darke County Sheriff’s deputies to the 3400 block of State Route 571 in reference to an injury accident involving a vehicle that was being pushed from a local business.

According to the Darke County Sheriff’s Office, a preliminary investigation revealed a 1991 black Nissan 300 ZX was being pushed from a garage bay to an open lot located beside a privately owned repair shop. The vehicle, which was being maneuvered by Emma Jennings, 21, of Greenville, was being pushed by Dodge Sucharda, 22, of Greenville and Alexander Heindl, 28, also of Greenville. The Nissan entered into the eastbound lane of traffic of State Route 571 while being moved resulting in the vehicle being struck by an eastbound 2005 turquoise Dodge Caravan, driven by Gerald Bromagem III, 39, of Union City, Ind. As a result of the collision, the Nissan being pushed then struck Mr. Sucharda and Mr. Heindl causing injuries.

Sucharda and Heindl were both treated on the scene by Greenville Township Rescue, for were described as non-life-threatening injuries, prior to being transported to Wayne HealthCare where their conditions remain unknown at this time. Jennings and Bromagem were both treated for minor injuries on the scene before refusing any further treatment or transport to a medical facility.