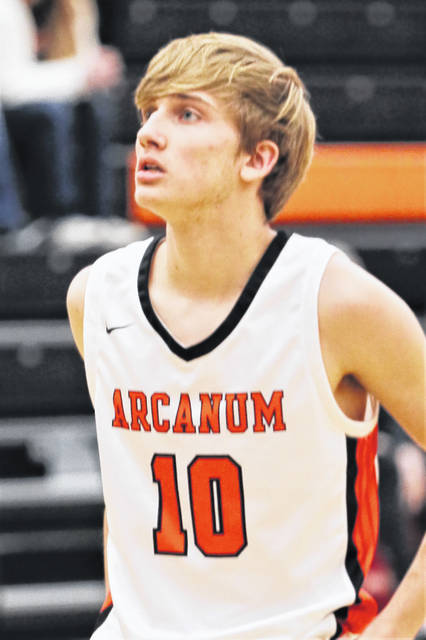 ARCANUM – The Arcanum Trojans held off a late Eaton rally to defeat the visiting Eagles 50-48 in non-conference action.

“Our kids relaxed and made the plays that they needed to make to win the game,” said Arcanum coach, Roger McEldowney. “Eaton had several opportunities but we had a bunch of stops down the stretch. The guys stepped up when they needed to, made some free throws and some buckets – a good team win.”

Arcanum’s leading scorer on the season, Jake Goubeaux went to the bench early with an injury and would not return until the closing seconds of the first as the team outscored the Eagles 17-9 led by 4 points each from Logan Todd, Cameron Burke and Nick Sharritts. Goubeaux added a 3-pointer and Ian Baker went 2-2 at the line.

The Trojans would get its first double digit of the night; 19-9 at 5:50 and held 15 point leads of 28-13 and 30-15 in the second taking advantage of seven Goubeaux points and 4 points each from Chase Werling and Sharritts to take a 32-18 lead at the break.

“I didn’t think we played a very good first half,” McEldowney stated. “I thought we gave up a lot of easy buckets. It didn’t seem like we were real focused out of the chute or we could have been up more.”

Goubeaux and Todd baskets to open third quarter play gave the Trojans an 18 point lead at 7:07 in what would prove to be the team’s largest lead of the night at 36-18.

The Eagles found its 3-point range knocking down three consecutive treys followed by a 2 point basket and a fourth 3-pointer of the quarter to make it a 10 point 42-32 game at the end of three complete.

Eaton took advantage of back-to-back fourth quarter 3-pointers, a 2-point bucket a third triple and a free throw to open the fourth with 12 unanswered points and grab its first lead of the night; 44-42 with 5:48 on the clock bringing a timeout from the Trojans’ bench.

The Eagles put Arcanum’s defense to the test the remainder of the game with the Trojans buckling down to close out the night on an 8-4 run hanging on to earn a 2-point 50-48 victory.

“Eaton got hot in the second half,” said Coach McEldowney. “We were trying to focus more on keeping the ball out of the paint and they hit some shots unlike any that we’ve seen them on film.”

“You have to give them credit and then we turned the ball over a bunch,” McEldowney added. “We have been really good this year on taking care of the ball but we didn’t do that so well today. That ended up hurting us and allowed them to come back.”

Eaton won the 3-point battle knocking down 7 treys all coming in the second half. Arcanum hit 3 triples, all in the first half. Arcanum a slight advantage at the free throw line 11-19 to Eaton’s 9-19. The Trojans accounted for 15 2-point baskets while Eaton was connecting on 9 2-point buckets.

“We have been working with Nick Sharritts (6’5” sophomore) and Chase Werling (6’4” junior),” Coach McEldowney said following the game. “Chase did a nice job when he was in there as well. We have been working hard on trying to get some paint touches and some buckets in the paint. They did a pretty nice job for us tonight. We just need more consistency out of them so that we can count on that each and every night out.”

Jake Goubeaux led Arcanum and all scorers with a game high 18 points. Sharritts added 12 points for the Trojans in the win.

“Jake was solid again,” said McEldowny. “Just proud of the way he played.” 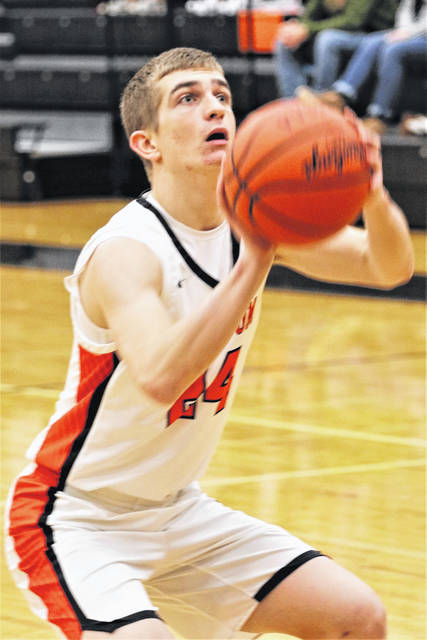 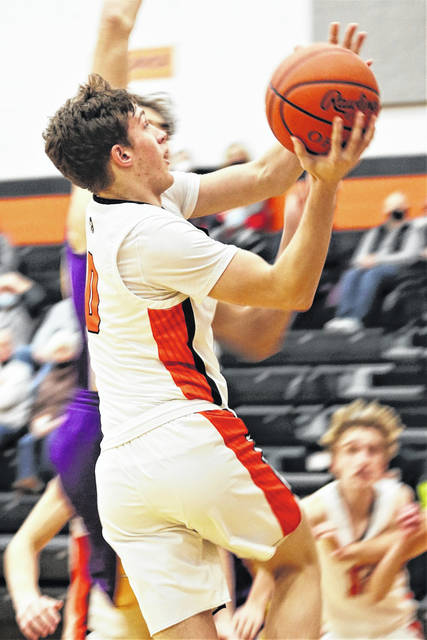 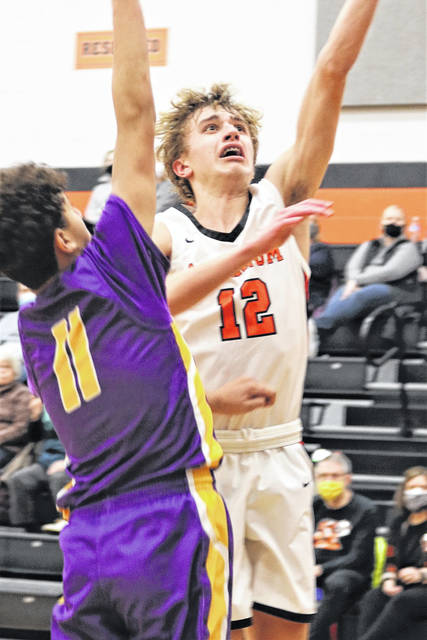 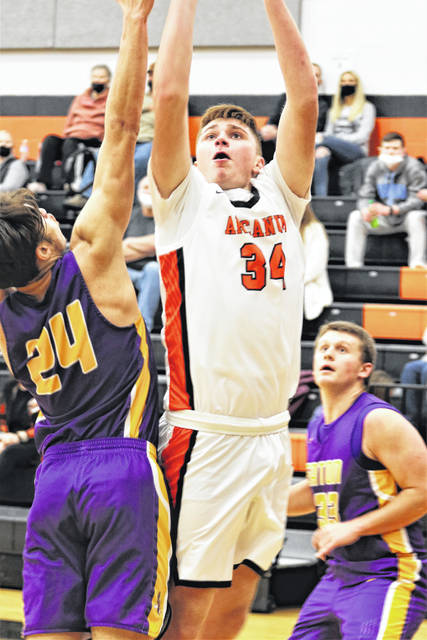 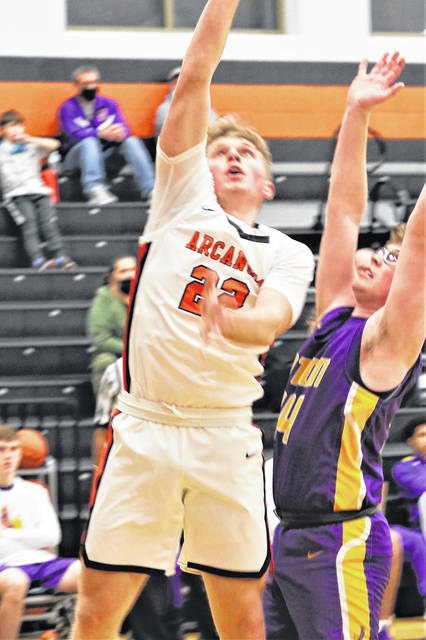 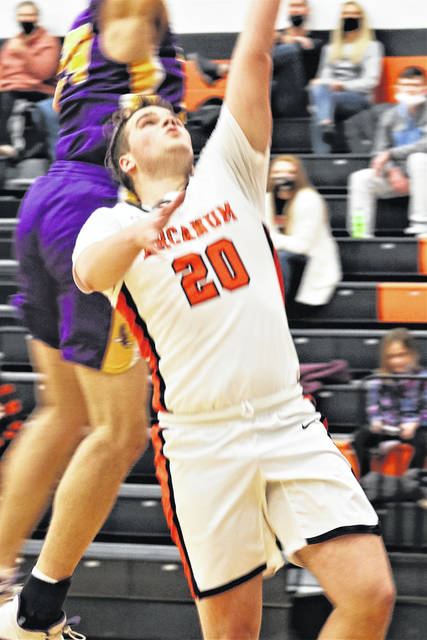 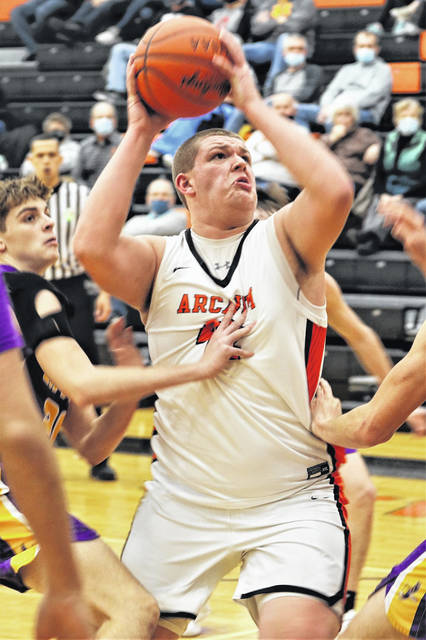 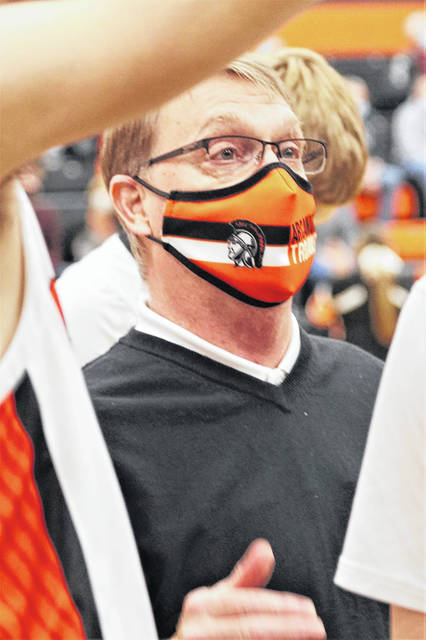