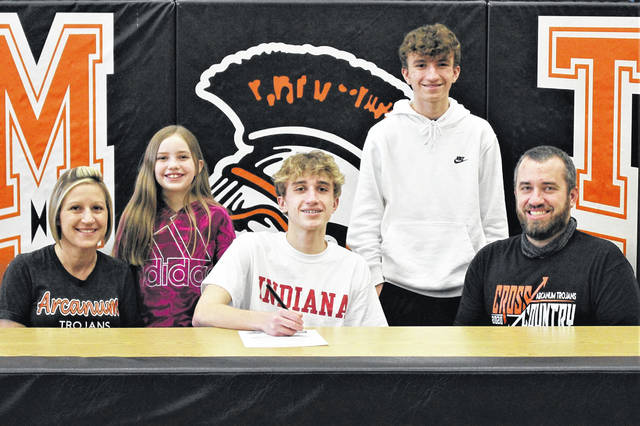 “It has been of dream of mine to be a college athlete in any way possible and I love running,” said Todd. “I am super excited to be going to IU East.”

“I think Logan is going to do great,” said Arcanum track and field and cross country coach, Chris Kessler. “Logan works very hard and we are very excited that he is taking this on. I don’t think he even gave it any thought because in spring time he is in baseball but he is going to do very well in cross country and track for IU East.”

Todd plans to major in accounting while taking his athletic skills to the next level.

“I chose IU East because I can run there and I want to be an accountant,” Todd stated. “They have that major there and I have heard many good things about IU East. I have had many people tell me I should go there and I like being close to home as well so that is another plus.”

Todd sees himself fitting in well at the Richmond, Indiana school both in the classroom and on the field.

“I see myself fitting in well coming from a small school,” said Todd. “I like that atmosphere and I think it will be a great fit there.”

“Logan is very competitive on the course,” said Arcanum assistant track and field and cross country coach, Jonathan Junkins. “Logan is laid back at practice but when it’s time to compete he’s one of the biggest competitors I have had the pleasure to coach.”

“I want to thank my parents and my coaches, Coach Kessler and Coach Junkins, family and friends and all the coaches throughout my high school career,” Todd said. “I showed up the second day of practice my freshman year just doing it for conditioning for basketball and it ended up turning into something even better.”