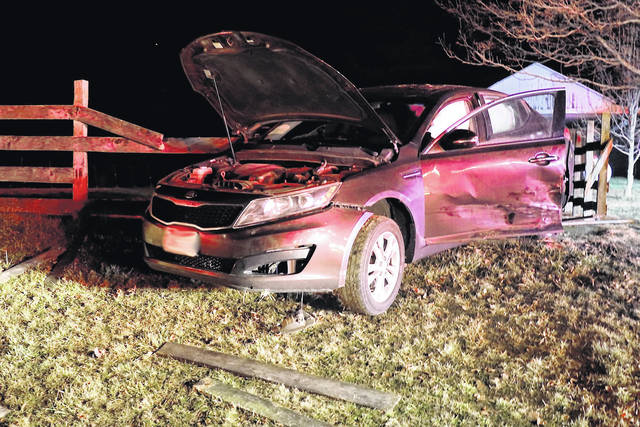 GETTYSBURG — A driver was transported for injuries early Thursday morning following a two-vehicle crash that sent one vehicle careening off the roadway.

At approximately 6:04 a.m., emergency personnel from Gettysburg Fire and Rescue responded along with Darke County deputies to the intersection of U.S. Route 36 and Arcanum-Bears Mill Road in reference to a two-vehicle crash with possible injuries.

According to the Darke County Sheriff’s Office, a green 2000 Pontiac Grand Am, driven by Amada Mick, 55, of Arcanum, was traveling northbound on Arcanum-Bears Mill Road and came to a stop at the intersection of U.S. Route 36. Mick failed to notice and then pulled into the pathway of oncoming traffic, resulting in a collision with a westbound maroon 2013 Kia Optima, driven by Christine Norris, 55, of Greenville. The Norris vehicle continued traveling west off the right side of the roadway before coming to rest after striking a fence.

Mick was cited for failure to yield from a stop sign.