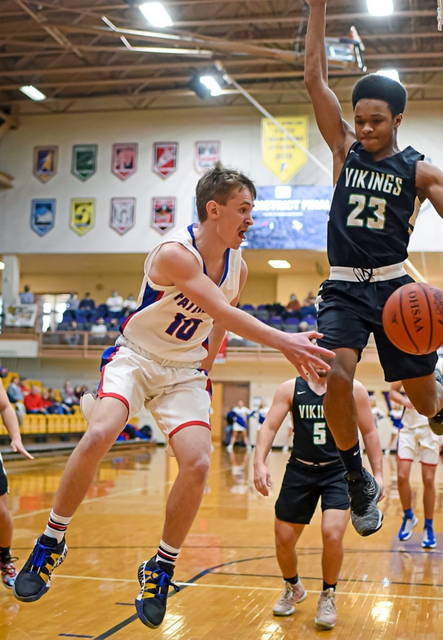 TV started a little slow in the contest as New Miami went up 5-0 before back-to-back triples by Dalton Delong and Layne Sarver put the PATS up 6-5 at the 4:22 mark.

The Vikings regained the lead 7-6 only to lose it on back-to-back scores by Sarver and Suggs to give TV a 10-7 lead at the end of the 1st quarter.

Tri-Village length and defensive pressure on the perimeter stifled New Miami holding them to just 3 points in the 2nd period while Layne Sarver added another 8 points, 13 in the first half.

There were a couple of highlight reel plays in the 2nd quarter worth mentioning by Jason Hale and Josh Scantland.

Wilson Suggs picked up a couple of fouls giving Jr. guard Jason Hale playing time. Hale gave the Pats a little spark on a drive to the rim with a sweet wrap around pass opposite block to Justin Finkbine for an easy score.

“Jasonhas been a bulldog all year for us, he came in and played his role and gave us a spark on both ends of the floor,” Tri-Village coach Josh Sagester praised.

Josh Scantland provided another highlight to end the half by blocking a Deanza Duncan shot, then he hustled up court reboundedthe fast break miss for a stick-back to give TV the 25-10 lead at the break.

Tri-Village used a good inside outside game in the 3rd frame scoring 10 inside the paint, 9 from behind the arch and 3 from the charity stripe to go up 47-28 heading into the final stanza.

Justin Finkbinenetted 6 inside while Sarver and Delong connected from outside.

New Miami made a run and closedthe gap to49-37 after a Duncan triple in the 4th quarter before the Patriots put their foot back on the gas to go onto win by the score of 62-39.

New Miami came in with three players scoring over a 1,000 career points; and as a team averaged 8 triples a game.Tri-Village length pushed the Vikings out on the perimeter and they madejust 4 on the night.

“Our perimeter defense was really goodtoday;we talked all week about being on ball and containing the right hand drive and make them take contested 3’s. We knew they had an internal shot clock where they were going take some from deep if they didn’t get what they wanted. Our two bigs did a great job of being in spots, being visible and good help defenders,” Sagester stated after the game.

Offensively Layne Sarver earned his “All Southwest District Player of the Year” status with a very smooth 31 points connecting on 5 treys and 6-6 from the free throw line.

“He was really good, I’m really proud of his effort, when he’s making shots he’s really, really special and our team is obviously a lot better,” Sagester applauded.

“Big players make big plays in big games and that’s what I told him, go out and be the best player on the floor and he certainly was today,” he added.

But Tri-Village had solid contributions across the board. Justin Finkbine had 11 and Dalton Delong 10, Josh Scantland 6 and Wilson Suggs 4.

In the last game it was Justine Finkbine & Wilson Suggs leading the way which shows the versatility of the team, that on any given night other guys can hurt youby being elite in their roles.

“We’ve got different guys who can step up on any given night depending on the match-ups.”

“Today Justin Finkbine had 11, he missed some early but finished strong, he’s a tough match-up. Josh Scantland rebounded and defended well and obviously Layne had a big night. Those three bigs are tough match-ups. “

“Dalton Delong hits the first 3 and a few more throughout the game and Wilson Suggs hit a few the same goal, win – winning is the most important thing,” Sagester said.

The last District Championship for Tri-Village was in 2017 with Josh Sagester at the controls. He returns after missing the last 3 season to help the Patriots bring another title home and that brought a smile to his face.

“Winning the District feels great, it’s great for the kids and great for our community, it’s where we need to be, playing for championships, hanging banners and cutting nets,” Sagester commented.

“It’s what we talk about in when we’re working hard inJune & July so when we get moments like this we are prepared to take full advantage of it,” Sagester concluded.

The Patriots will have a chance to continue their journey as they move onto the Regional Semi-Final where they will take on 23-1 Cedarville who defeated Jackson Center 50-48 in the other District game. Cedarville is currently on a 17 game win streak.

The game will be played on Tuesday again at Vandalia Butler High School at 8pm. 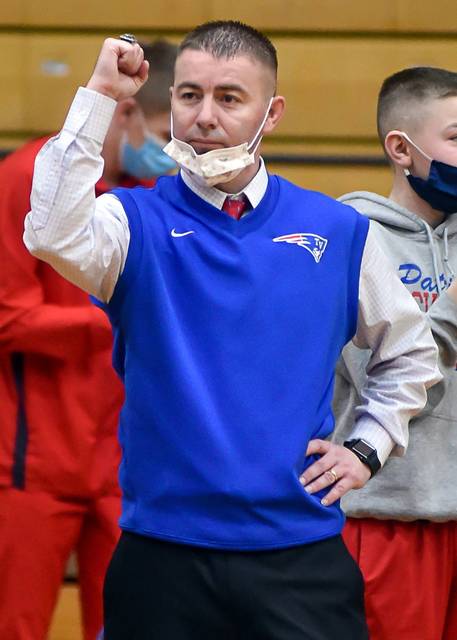 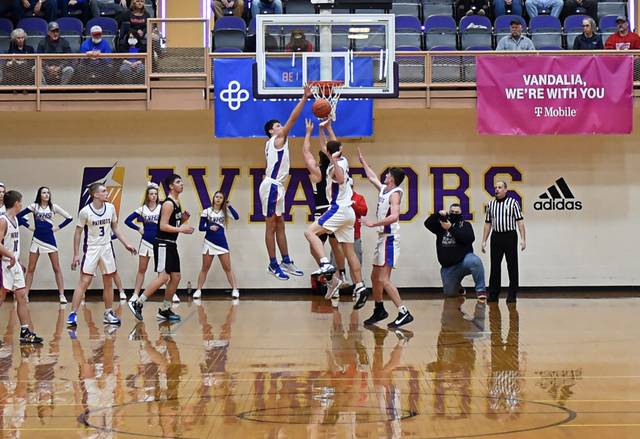 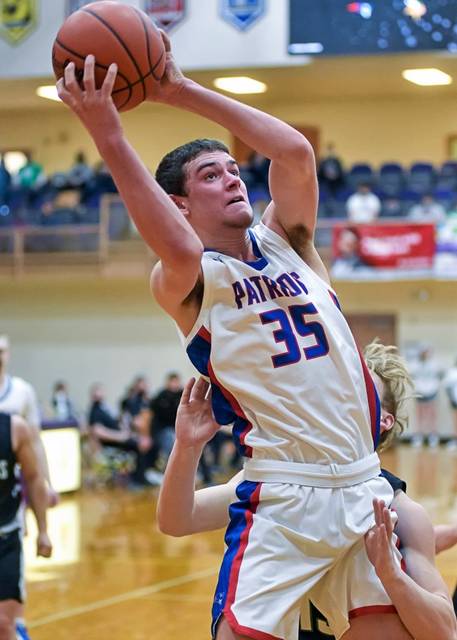