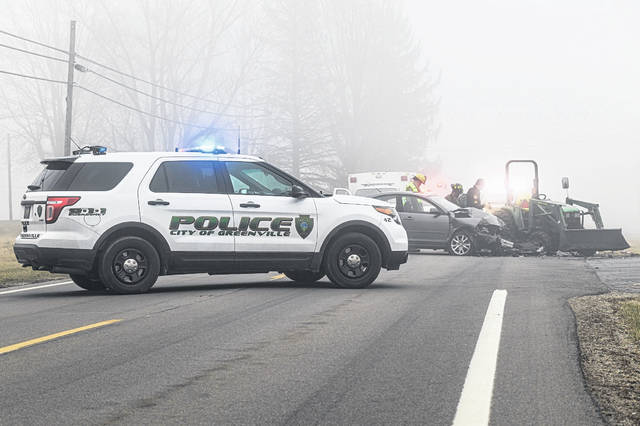 GREENVILLE — A Darke County Parks District employee was transported for evaluation early Tuesday morning following a two-vehicle crash that left him ejected from the tractor he was operating.

At approximately 9:03 a.m., emergency personnel from Greenville Township Fire and Rescue responded along with Darke County deputies and officers from the Greenville Police Department to the area of 4267 State Route 502 in reference to the report of a two-vehicle injury crash involving a vehicle that had struck a tractor.

According to the Darke County Sheriff’s Office, a preliminary investigation into the incident revealed a Darke County Parks District John Deere 4310 was traveling west on State Route 502 when the driver attempted to make a left turn into the drive of Shawnee Prairie Preserve-Nature Center and Park Office when, due to heavy fog, the driver failed to notice and pulled into the pathway of oncoming traffic. The John Deere Tractor was struck by an eastbound Mazda 3 resulting in the Parks District employee being thrown from the tractor.

The male driver of the John Deere tractor was treated at the scene for minor injuries prior to being transported by Greenville Township Rescue to Wayne HealthCare for further treatment and evaluation. The male driver of the Mazda was also treated for minor injuries prior to refusing any further treatment and transport to a medical facility.

Deputies from the Darke County Sheriff’s Office contributed the cause of the crash to heavy fog that had settled into the area throughout the morning hours leaving dangerously low visibility in areas across the county. 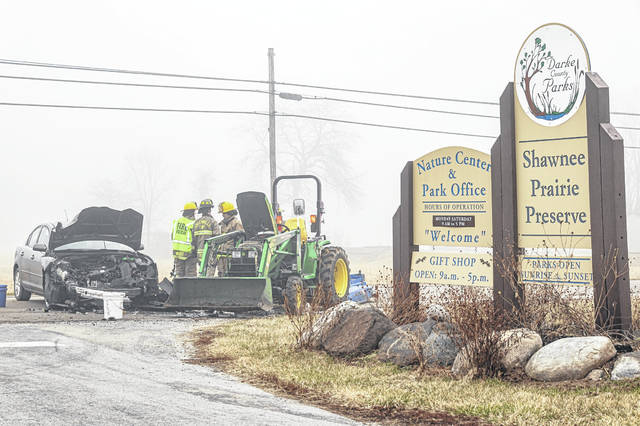