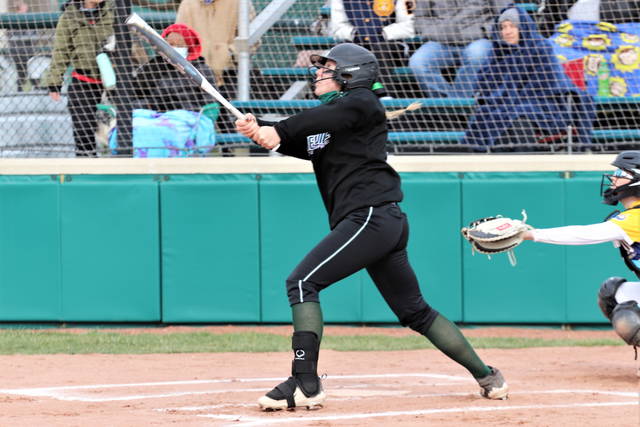 GREENVILLE – The Greenville Lady Wave softball team moved to 5-0 on the season with a non-conference win over the GWOC’s Springfield Lady Wildcats in 15-2 run rule win.

“JV team gets a win today – the varsity and JV are both 5-0 now, just neat,” said Greenville varsity coach Jerrod Newland. “We are going with an off day tomorrow and Friday we will head to Fairborn and obviously Saturday here with a great day for Lady Wave Softball.”

Susie Blocher crushed a two-out first inning home run deep over the right-center field fence into the teeth of a strong wind to give the Lady Wave a 1-0 lead after one inning of play.

“That first one Susie hit, goodness gracious, it was like a golf shot,” Newland said of the first of two Lady Wave homers. “It went over the fence by 40-feet and into a very stiff breeze.”

Greenville used second inning walks to Shyanne Slade and Brianna Fellers and a two-out 2-run double off the bat of Alaina Baughn to give the Lady Wave a 3-0 lead. Blocher legged out an infield single to third setting up back-to-back errors to plate 3-runs sending the teams to the third inning with Greenville leading 6-0.

“Great day for Lady Wave Softball and you look at it there,” Newland stated. “We came out and got the one there in the first. They made a couple plays and with two-outs in the bottom of the second it’s 1-0 and then we string a few together, made a few plays and just excited for the program.”

Skylar Fletcher slammed a run scoring double to center scoring Baughn to give the Greenville squad a 10-0 lead after three complete.

Grace Shaffer set the Lady Wildcats down in order for the third consecutive inning bringing the senior’s work on the mound to a close after four innings of scoreless pitching for the Lady Wave.

Greenville plated 5-runs in the bottom of the fifth starting with a one-out walk to Savannah Leach, a B. Fellers single to center and a 3-RBI blast off the bat of Wright deep over the left-center field fence into the face of a stiff wind upping the Lady Wave lead to 13-0.

“Ny (Nyesha) hits her’s, goodness gracious, I didn’t think any ball would leave the field today let alone two,” Newland said of the team’s second homer into the wind. “What I like is both were opposite field home runs and it’s really discipline – older kids can wait, wait, wait and explode, and both balls were shot.”

A misplayed Blocher grounder to short, a Fletcher single to center and a 2-run double to left off the bat of Kenna Jenkinson had the Lady Wave up 15-0 with four-innings in the book.

An error and a walk had Springfield runners on first and second bring the Lady Wildcats Pettiford to the plate. With two-outs and a two-strike count, Pettiford knocked a hard grounder just inside the first base bag good for a 2-run triple to make it a 15-2 score – the final score of the game.

“We’re working,” Coach Newland said of the team’s continual improvement in the field. “Today is the last day of March and I can’t say its March anymore. March is over so we are building it and we are really excited for the April ahead and a great Easter weekend here for Lady Wave alums and everybody come back for a couple games on Saturday.”

Shaffer picked up the win for the Lady Wave tossing four-innings of shutout ball allowing 1-hit and no walks. Kylie Hamm threw one-inning in relieve 1-hit and a walk.

“Saturday is going to be fun,” Coach Newland said. “We have Beavercreek and Greenville playing here at the stadium at noon, JV double header on the auxiliary field and game two will be Beavercreek and Mechanicsburg. After that game Mechanicsburg will come over and play us – three good programs, all three undefeated and the opportunity ahead.”

“Just fun for where it’s at and a good day for the community,” Newland concluded. “What a great way to celebrate the Blessed Easter weekend.” 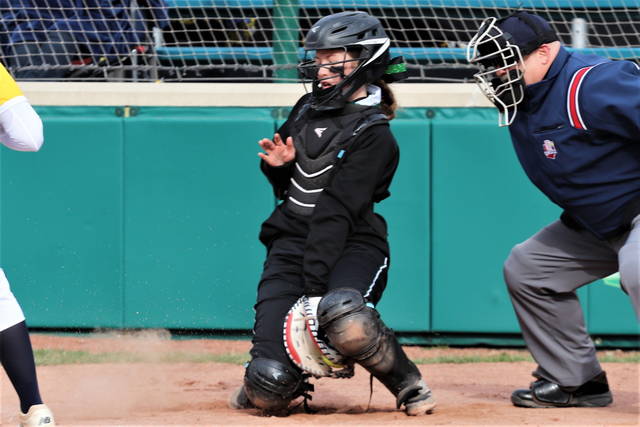 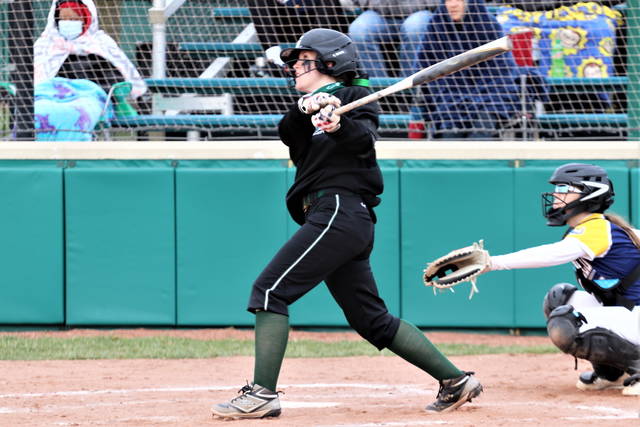 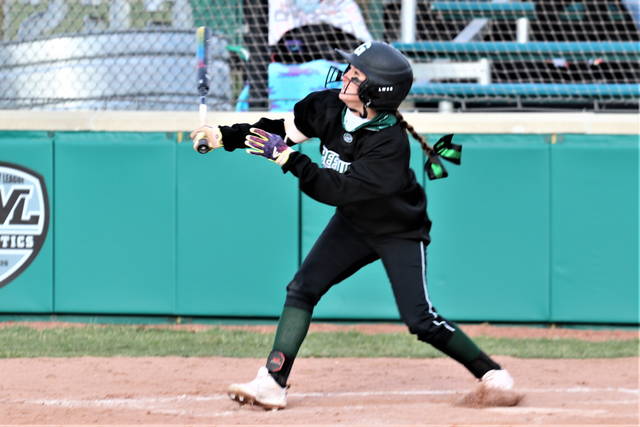 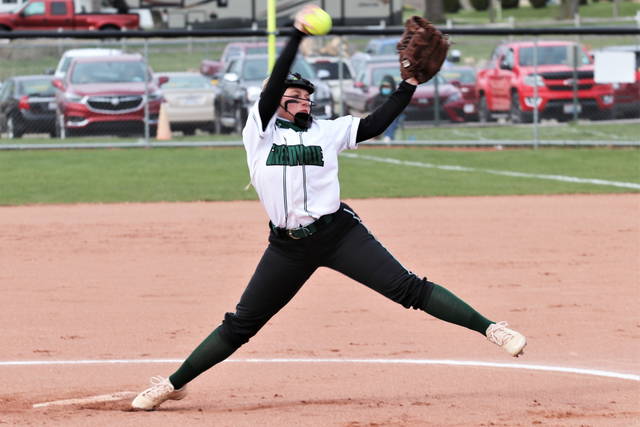 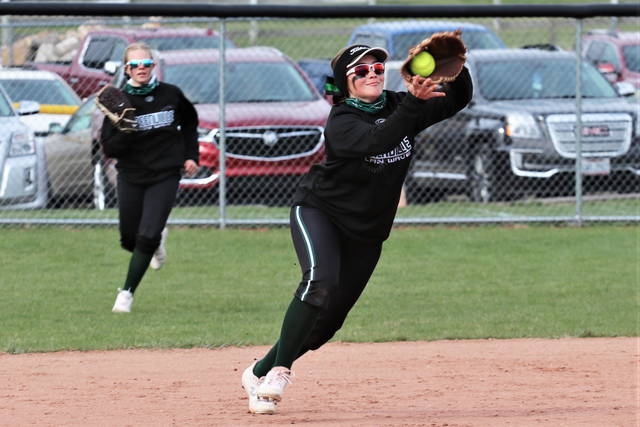 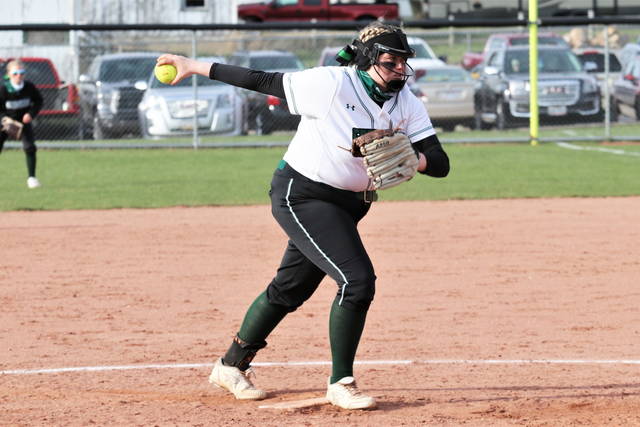 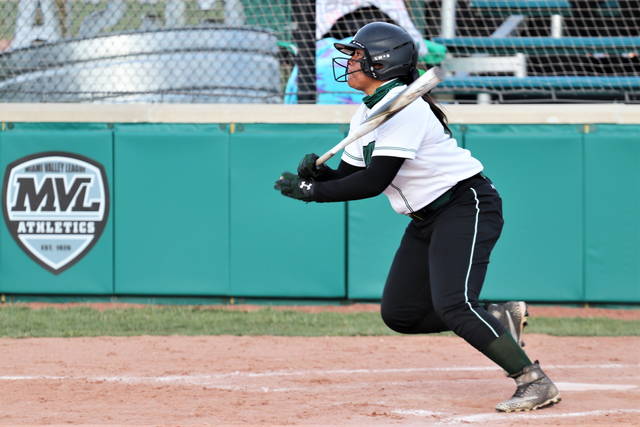 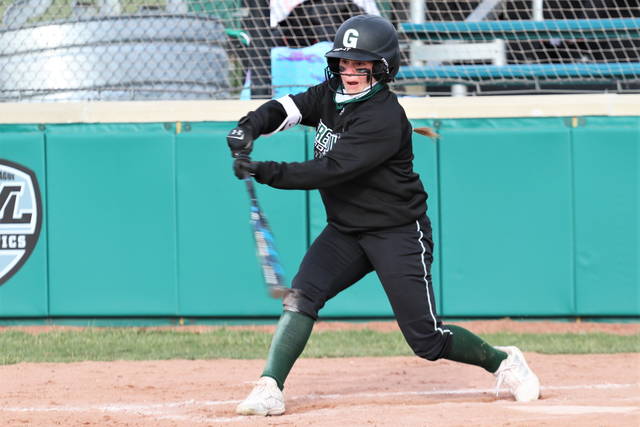