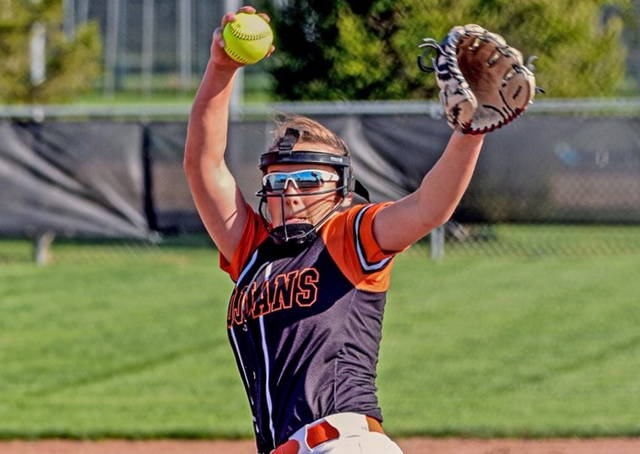 BRADFORD – The Arcanum Lady Trojans rode the arm of Peyton Garbig to down the undefeated Bradford Lady Railroaders 1-0 in a 10-inning marathon with Garbig tossing a no-hitter.

“Peyton Garbig was amazing,” said Arcanum coach, Michael Morris. “Pitched a no-hitter, she was on her game. She is starting to get into pitching shape for us.”

“It was two great teams that battled,” Morris continued. “We just made more plays than they did. I think if we play 10 times we probably split – we win five, we lose five.”

Inning No. 9 had both teams with outstanding defensive plays beginning with runners on first and third with one out for the Lady Trojans followed by a strikeout and a hard hit Arcanum ball that looked ticketed for the outfield only to have Bradford’s Hamilton snare the drive near second base on the run.

“We had first and third with two outs and their shortstop made a heck of a diving catch up the middle that saved a run,” said Morris.

Arcanum answered with a play of its own in the bottom of the inning with Trojans shortstop Emilie Fout making a leaping catch of a looper off the bat Skip Miller. With two down, Mylani Beireis hit a drive that looked certain for the outfield gap, but it was Arcanum’s Meghan McCans making a running catch in centerfield setting up the dramatic 10th inning of play.

“My infield is very aggressive and our outfield is very quick,” Morris stated. “They went after some balls and our freshman shortstop, Emilie Fout made a heck of a play.”

With two outs in the top of the tenth, Arcanum’s Meghan McCans collected and infield single and moved to second on a low throw to first on the next play and moved to third rounding the bag colliding with Bradford’s third baseman and continued home.

Bradford made the tag but the team was called for obstruction at third awarding Arcanum the game’s lone run of the game.

“Our girl ran into their third baseman rounding third,” said Coach Morris. “I saw it, I sent her home and left in into the umpire’s hands to make the call – fortunately it went our way.”

Arcanum’s Peyton Garbig set the Lady Railroaders down in order in the bottom of the 10th to earn the no-hitter, allowing no runs, striking out 11 and walking three.

“We only had three hits but we put the ball in play,” said Morris following the game. “We weren’t afraid, that was one thing. We stressed all week – don’t be afraid. You’re going to strikeout…we just have to swing the bat.”

“I told them earlier this week, we’re going to strikeout 8-10 times and we’re going to have a shot so striking out 13 in 10-innings is a good deal against Miller. She is the real deal, she is a heck of a pitcher. Payton Garbig is too – she had 11 strikeouts,”

“We had a great crowd,” said Morris. “It was like a district final feeling. There were people lined up down the fences both ways.”