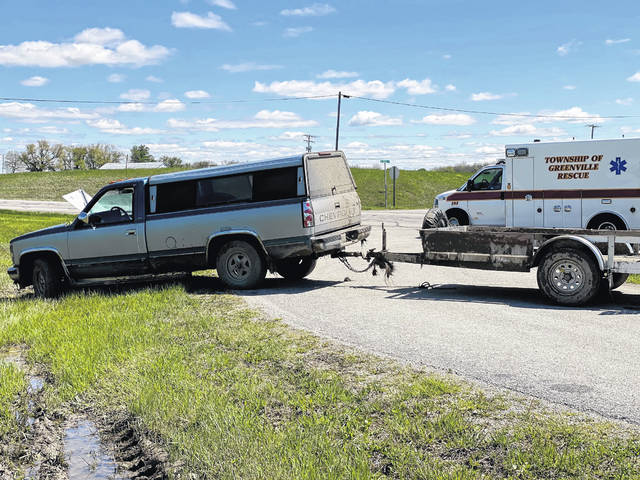 GREENVILLE — A Saturday afternoon crash ended in the death of a Versailles man as the result of a medical emergency suffered while driving.

At approximately 11:30 a.m., emergency personnel from Greenville Township Fire and Rescue responded along with Darke County deputies to the area of U.S. Route 127 and Oliver Road in reference to a two-vehicle crash with possible injuries.

According to the Darke County Sheriff’s Office, a preliminary investigation showed that a blue 1992 Chevrolet Silverado driven by Philip Martin, 67, of Versailles, was traveling north on U.S. Route 127 near Oliver Road. Mr. Martin suffered an unknown type of medical emergency, causing him to lose control of his vehicle and cross left of center crossing over Oliver Road where he eventually came to rest in a ditch. A southbound 2013 black Dodge Charger, driven by Kellen Amspaugh, 31, of Ansonia, in an attempt to avoid a collision with the Martin vehicle, was forced off the right side of the roadway up a steep embankment where he came to rest in a ditch.

Mr. Amspaugh was examined on the scene by Greenville Township Fire and Rescue where he refused any further treatment and transport to a medical facility. Paramedics treated Mr. Martin on the scene prior to transporting him to Wayne HealthCare where he was later pronounced dead due to the medical condition suffered while driving.