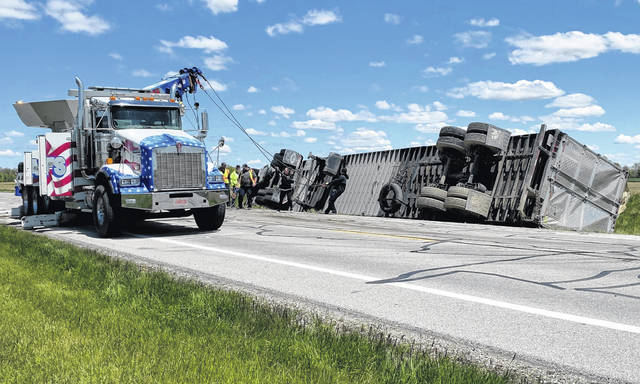 YORK TOWNSHIP — U.S. Route 127 remained closed for several hours Wednesday following a single-vehicle crash that left a semi-tractor and trailer, fully loaded with eggs, laying on its side.

At approximately 10:58 a.m., emergency personnel from the Rossburg Fire Department responded along with Darke County deputies to the 12200 block of U.S. Route 127 in reference to a semi-tractor and trailer overturned in a ditch.

According to the Darke County Sheriff’s Office, a black 2012 Mack semi-tractor and trailer, owned and operated by Cooper Farms, was traveling north on U.S. Route 127 when for unknown reasons the driver lost control of the vehicle and left the right side of the roadway. The semi-tractor and trailer continued north along a ditch line before reentering the roadway eventually overturning onto its side coming to rest once again off the roadway.

The single occupant male driver of the Mack truck was able to climb free of the wreckage without injury. U.S. Route 127 remained closed between Medford and Brock-Cosmos Roads well into the afternoon hours while emergency crews worked to upright the overturned vehicle and clear the wreckage. Personnel from Cooper Farms also responded to the scene to assist in the cleanup and recovery process. 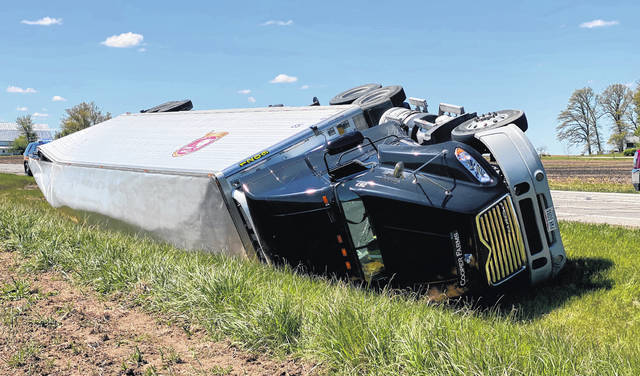