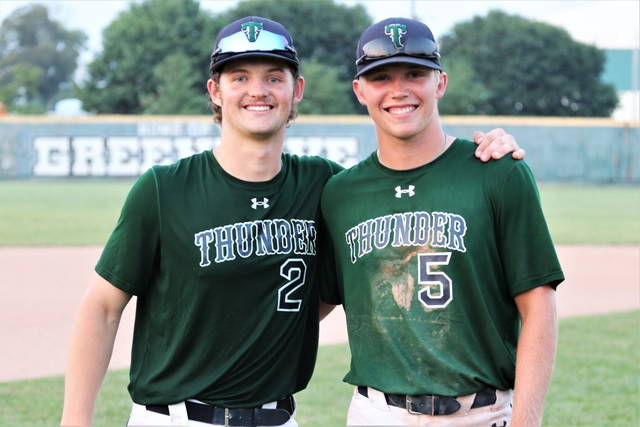 Beyke, a Greenville alum and Kletzly, a Lebanon High School graduate are more than just teammates playing for the Trine University Thunder baseball program. Both were standout players on their high school teams, Beyke at shortstop and pitcher, Ketzly predominantly a catcher while playing some outfield.

“Having Tyler for four years it’s having another leader out there on the field and to have Jack just adds another leadership dimension to our game,” said Post 140 coach, Chad Henry.

Both players are majoring in Civil Engineering at Trine while playing NCAA D-II baseball for the Thunder.

“I caught Tyler’s bullpen and that is how we met,” said Kletzly. “We decided when we went to Trine the next week we would have to catch up again and we both kind of knew we wanted to go to Trine. After we got our offers we decided to be roommates. We have been buddies since and it’s good knowing I’m going to have a shortstop down in the sixth hole (shortstop) who is going to give me all he’s got and it’s also good to have a guy who can put a tag down too when you’re doing throw-outs.”

Beyke and Kletzly had the chance to become Post 140 teammates when Kletzly’s previous team did not field a team for the 2021 summer season.

“We were discussing our plans about summer ball and Jack was telling me his team wasn’t going to be playing this summer,” said Beyke. “I told him if he would like to get some live ABs (at bats) and you want to be a part of a team – we would definitely be glad to have you in Greenville.”

“It has been a really fun summer so far – we’re not done yet,” continued Beyke. “Jack has been a big asset to our team. He has helped us with our success and he’s a lot of energy in the dugout and on the field. He has blended real well with the guys and has good chemistry, so it’s been a really good add to our team.”

“It has been awesome,” added Kletzly. “I’ve been welcomed with open arms. Everybody has been so great. I didn’t know anybody’s names and these guys took me in like we have been teammates for years – that is an awesome culture to be a part of.”

Coach Henry is pleased with the leadership both college players bring to Post 140 including Arcanum Trojans catcher, Aiden Psczulkoski.

“Jack has been a really good addition to the team,” Coach Henry stated. “The big thing, he’s been able to work with my younger catcher. I really like this younger catcher, Aiden who I have coming through our 19U program. For him to be able to see the way Jack approaches the game, goes about it, talks to him about pitch calls and different aspects of the game is going be huge for Aiden down the road.”

“Aiden is a great guy to teach,” said Kletzly. “He’s a sponge and he takes in anything I can tell him. He’s a good kid and he is definitely going to be a good catcher so it has been good to be a part of that as well.”

“I have his number and I definitely will keep up to date with him and make sure everything is going well,” Kletzly added. “If he reaches out to me with questions I will be happy to answer them.”

As the Post 140 baseball season winds down, Beyke and Kletzly complete their eligibility to play for American Legion baseball soon bringing their playing days in Greenville to a close while making a friendship that will last for a lifetime.

“We haven’t known each other real long but I already know that we are going to be brothers for life,” Beyke stated. “I know I can always count on Jack and I know that he knows that he can count me. Whenever we need each other we are always there for one another.”

“It was just one of those things where the first time we met we knew we were going to be good dudes,” added Kletzly. “We both have level heads, we are aiming for success in life and when you get two of those guys together you can do some damage in the right way.”