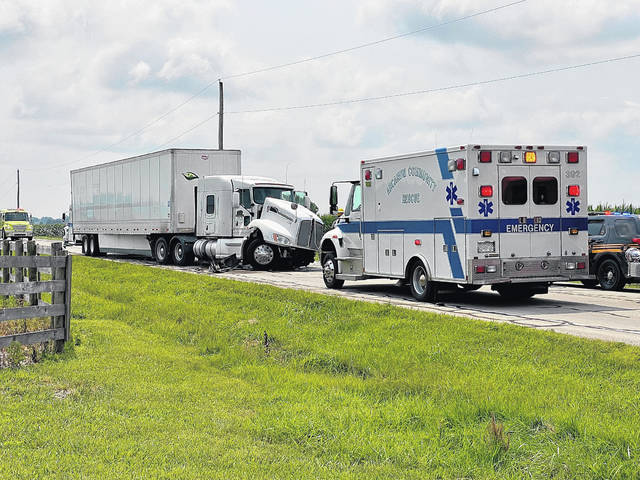 PITSBURG — A multi-vehicle crash Wednesday afternoon ended with the driver of an SUV being airlifted from the scene after colliding head-on with a semi-tractor and trailer.

According to the Darke County Sheriff’s Office, a preliminary investigation revealed a tan 2013 Ford Edge, driven by Amber Hoskins, 33, of Greenville, was traveling southeast on State Route 49. Ms. Hoskins’ vehicle, for unknown reasons, traveled over the centerline of the roadway where she side-swiped a northwest bound black 2006 Buick Rendezvous, driven by Pamela Penticuff, 51, of Greenville. Hoskins continued in the wrong lane of travel where she then struck a semi truck head-on before traveling off the right side of the roadway coming to rest at the edge of a field. Penticuff, in an attempt to avoid the collision, continued off the right side of the roadway after being struck.

A black 2015 Chevy Equinox, driven by Brittany Voke, 33, of Greenville, which was also traveling northwest on State Route 49, traveled off the right side of the roadway and struck a trash can in an attempt to avoid the collision.

Hoskins, who was extricated from her vehicle by mechanical means, was treated for what were described as serious injuries at the scene by Arcanum Rescue. She was then transported by CareFlight to Miami Valley Hospital where she is listed in stable condition.

State Route 49 remained closed for nearly three hours while deputies conducted their investigation into the crash. No other injuries were reported as a result of the incident.