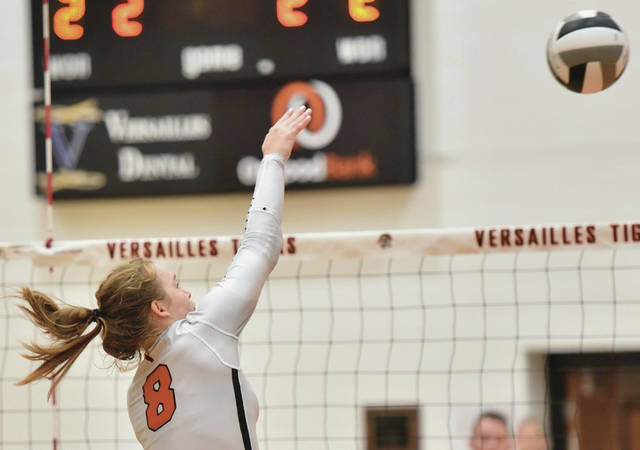 VERSAILLES — Versailles had a rough start to the season in Coldwater’s annual Spikeoff invitational on Aug. 21. Some adjustments already have the squad looking better.

Versailles rallied in each of the last three games and beat neighboring rival Russia 3-2 on Saturday to improve to 3-2 overall. The win came one week after the squad dropped two of three matches in the Coldwater Spikeoff.

“We’ve made a couple of lineup changes, and that’s played a part, but the whole team has bought in,” Versailles coach Kenzie Bruggeman said. “Everybody wants what’s best for the team. It’s hard to believe that was just a week ago. They’re playing with really great energy, and that’s what we want.”

Versailles dropped matches to Fort Loramie and Ottawa-Glandorf in Coldwater last Saturday, each by 2-0 scores. The squad didn’t amass more than 12 points in any of the four games across the two matches.

“For them to see putting in that hard work and grit a lot of times will bring you success, it’s great,” Bruggeman said. “I love for them to be able to see that, feel that, and now be able to celebrate that.”

It was the third consecutive loss for the Raiders (1-3) and ended a disappointing week. The Raiders lost 3-1 to New Bremen on Tuesday and 3-1 to Fort Loramie on Thursday.

“We need to slow everything down we’re doing,” Russia coach Aaron Watkins said. “We need to get back to basics this week in practice. Just slow things down, reset where we’re at and take it day-by-day.”

Russia won a Division IV district championship for the fourth consecutive year last season and has all but two starters back. The squad has five players on its roster 5-foot-10 or taller and had a massive height advantage on Saturday. That height advantage exists against most opponents, as does experience.

But Watkins said the leadership gaps left by the graduation of hitter Ashely Scott and libero Kendall Monnin haven’t been filled.

“Leadership’s the gap,” Watkins said. “We don’t have someone right now the girls know to go to in a situation. That’s part of growing and learning. They’re going to figure out who that is, and when they do, we’ll be just fine.”

Russia built a quick 8-4 lead in the deciding set on Saturday but scored two points the rest of the way, as Versailles fought back and won 15-10.

The Raiders committed 31 attack errors and 11 serve errors, several of which were in the fifth game.

Despite the three losses last week, Watkins said there are plenty of reasons to be optimistic.

Juniors Cece Borchers and Kate Sherman each had 10 kills for Russia while Carley Scott, Roni Poling and Bailey Pohlman each had six. Poling had five blocks and Borchers and Kelby Doseck each had four. Sherman had 18 digs and Doseck had 28 assists.

Sherman has amassed a team-high 47 kills this season while Pohlman and Poling each have 13 blocks to their credit. Junior Simone Puthoff has made a team-best 36 digs.

Freshman outside hitter Kirsten Bomholt has led Versailles with 58 kills. She had 26 against the Raiders on Saturday. Sophomore outside/right-side hitter Jenna Marshall has made 32 kills, including 14 on Saturday.

Bruggeman said junior Brynn Briscoe had made a big impact, too. Briscoe, the team’s setter, has made 99 assists, 37 digs and six blocks.

“She is an under-the-radar beast,” Bruggeman said. “You don’t notice what she does because she does it so seamlessly and not in-your-face. She saved so many balls today, crazy good defense, and ran a really good offense.”

The Tigers don’t have the height this season they had during 2017 and 2018 Division III state champion campaigns. Bomholt, Marshal and sophomore Cassie Bomholt lead the front line, and all are under 5-foot-10. Freshman middle blocker Taylor Wagner, who is 6-0, plays some off the bench.

“Our big thing this year is just to compete,” Bruggeman said. “We’re obviously not the tallest team on the court. …We know it has to be perfect for us to get a block. It’s all about timing and when you press. We worked a lot on that this whole entire preseason. We’ve spent a ton of time in the weight room so when we’re there, we can press and we can try to jump as high as we can.”

Bruggeman credited seniors Ashley Jones and Claire Rethman for leading the squad in practice. Neither see much playing time.

“They don’t get recognition for how much they impact the team,” Bruggeman said of Jones, Rethman and the squad’s seniors. “… They build (confidence) for our team and push us every day in practice.”

Versailles was scheduled to travel to Celina on Tuesday and is scheduled to open Midwest Athletic Conference play on Thursday by hosting Parkway.

“We’re constantly just focusing on ourselves and looking at how we can grow,” Bruggeman said.

Russia was scheduled to host Houston on Tuesday and travel to Fairlawn on Thursday in SCAL play.