GREENVILLE — The Greenville High School Theatre Club transported audiences to “a world of pure imagination” with four performances of Roald Dahl’s “Charlie and the Chocolate Factory” at Henry St. Clair Memorial Hall over the weekend.

Fans of both film adaptations starring Gene Wilder, and later, Johnny Depp, may wonder how some of the magical scenes could be staged. The colorful set, make-up and costume designs were impressive, but it was ultimately the superb acting by extraordinarily talented students that made it remarkably believable.

The performance began with the characters Augustus Gloop, Violet Beauregarde, Veruca Salt, and Mike Teavee, seated randomly among the audience. The Reporter ran up to each one, interviewing them where they were stationed, making theater-goers feel a part of the action.

Freshman Charlie Pope gave an endearing performance as the title character, Charlie Bucket, and Maxwell Jordan, played the lead role of Willy Wonka brilliantly. He flawlessly captured all the quirkiness of the capricious character, at times hilarious, at times, intimidating, and in the end, a genuinely warm philanthropist.

The show went on, despite challenges. “We were down one Oompa-Loompa,” lamented Sierra Crist, stage manager. Due to illness, the Saturday matinee was performed with only four Oompa-Loompas. The choreography, which included cartwheels, pyramids, and dancing on a metal framework, was adjusted expertly, to compensate for the absence.

“I played the squirrel, too, and the cow,” said Katelyn Conway, who also played Mrs. Gloop memorably in her frantic scene following son Augustus’s unfortunate accident in the chocolate river. She was one of several students who played multiple characters, requiring quick costume changes. Emmie Myers changed from the Reporter into Mr. Salt, complete with wig and moustache; Carson Henry played the Candyman who sold Charlie the winning ticket, and Mr. Teavee; and Chloe Good delivered the opening monologue as Narrator, before becoming Mrs. Beauregarde.

Complex blocking made physical struggles appear realistic, notably when Conway, as the squirrel, dragged Kie Labig, another standout as the tantrum-prone Veruca Salt, offstage. Another tense moment was when Andrew Adkins, a very convincing Grandpa Joe, unleashed his righteous indignation when he thought Charlie was being cheated out of his rightful prize. 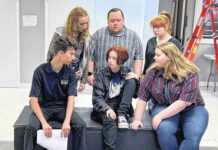 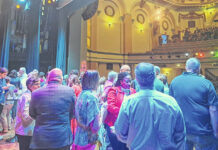 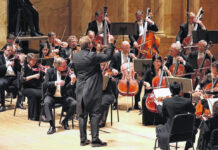