“You know, this is my favorite DC airport,” Rep. Davidson said. “Of all the DC airports, this is by far the best one.”

Darke County Comissioner Mike Stegall joined in with the joke before thanking Davidson and stating they are trying to make it better. Preparation, construction, and plans of expanding the Darke County Airport are underway as the airport brings federal money back to the local towns.

“With the help from Warren and the FAA (Federal Aviation Association), we will continue to grow this thing,” Commissioner Stegall said. “Getting funding and having people like Warren and others write letters saying, ‘hey look. This is a worthwhile project.’”

The Darke County Airport is looking to move the tower due to flight line issues, adding fencing eight feet high and three feet deep according to Stegall in order to keep the animals at bay. There are nine letters in the commissioner’s office from companies who wish to expand the airport, but funding is needed.

“The main thing is John Mayfield with the FAA. He’s been very very good to us.” Stegall said. “He came up and drove around, and he was impressed that Darke County was moving so far forward. He said ‘what do you want because I see the need. I see the need.’”

“You drive past and see all the construction.” Davidson said. “Seeing where it is and where it’s going to go is nice to see.”

Davidson goes on to bring up the local communities surrounding the airport stating what is next in line for the airport and explaining how coverage about “what is happening, why it is taking so long, and the progress that is planned” is essential for people to understand how the federal money is coming back to local communities.

“A lot of this is federal money going to work, and if the Federal Government seems so bent on spending federal money, we want some of it to make it back locally,” Rep. Davidson said.

Discussion continues between Commissioner Stegall and Rep. Davidson about the reality of federal funding and spending.

“People have to realize, a grant is their money coming back here,” Stegall said.

“The hard part is it might not be everybody’s top priority,” Davidson added. “Which is why in general it would be better to have less taxes heading to DC and more staying local. Then there isn’t any begging for it to come back for local priorities.”

Davidson explained how when the money goes to DC, it is hard to find a concept to use in order to get money back into the district.

“It is not always the things everyone locally would want.” Davidson said. “And that’s the challenge. Why would you want all the money locally to go to DC and let someone else make all the decisions?”

He continues to state locals could argue about whether federal funding should be present at all because it is a local project.

“I think the hardest part about this project around here is convincing people who don’t have an airplane that expanding the airport is going to be good for all of us,” Stegall said.

He explained how expanding the airport brings in tourists, businesses, and revenue. The airport allows large corporations like Midmark and Whirlpool to bring in clients, allows tourists to come up for Poultry Days and Eldora, and food vendors and gas companies gain more clients as well.

Stegall continued by saying everyone saw the potential and it is now playing out. Fuel sales are up, landings are up, and now this is happening. According to him, it is going to get better.

The commissioners and the FAA worked together with Midmark for more than a year and half in order to get CareFlight into the airport. Now that it is here, the commissioners believes the county is over the hardest part about getting people on board.

“Everyone thinks this airport is just for Midmark, and it’s not,” Stegall said.

A lot of the large corporations in Darke County fly into the airport. Not only is Darke County one of the largest agricultural communities in Ohio, but it is largely impacted by the industrial side too. Expanding the airport will bring in more jobs and revenue for the county, according to the commissioners.

Davidson was slated to appear at The Radiant Lighthouse Church to participate in a panel on Critical Race Theory Monday evening.

For more information about the FAA Grant and the project visit www.faa.gov/airports/aip/2021_aip_grants/map. For more on Rep. Davidson visit davidson.house.gov. 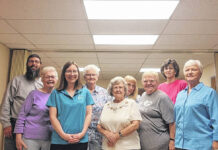