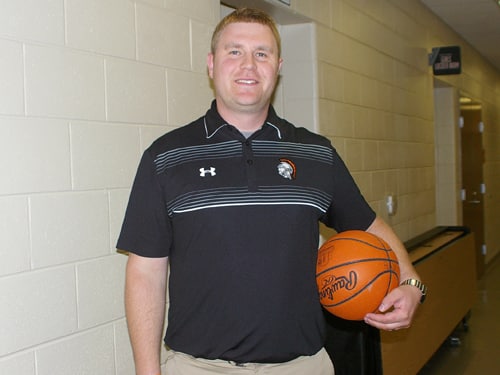 Matt Grote is the new Arcanum varsity girls basketball coach after he spent the past four year as an assistant with the Trojans’ boys basketball team.

“It feels really good,” Grote said. “It’s something I’ve been working for for a few years, being an assistant, kind of building my philosophy and portfolio. Just ready for the challenge.”

Grote has seven years of coaching experience as he was an assistant with the Northmont girls basketball team for three years and spent the past four years as an assistant boys basketball coach for Arcanum. He’s grateful that Arcanum now is giving him an opportunity to lead his own team.

“We’ve been through a parents’ meeting,” Grote said about his early days as the Lady Trojans’ new coach. “A lot of support from the parents so far, a lot of support from the girls. Besides that, it’s just last-minute planning, trying to get the schedule together, trying to get everything passed out with the ever changing stuff going on here with the building renovation happening. Just getting things together but good so far.”

Because of the coaching demands with the boys basketball team, Grote didn’t get to watch the girls team play a lot the past four years. But he has gotten to know some of the players as a teacher at Arcanum the past two years.

“I’ve had a handful in class,” he said. “It’s been nice because I’ve had lunch duty the past two years. So even though I don’t personally know all of them, I’ve seen them all, they’ve all seen me around. They know who I am. I know who they are.”

It will be a process for the Lady Trojans to adapt to the new coaching system that Grote implements, but he’s confident that in time they’ll adjust.

“I’m guessing a lot of it will be new,” he said. “I guess I’ll know more come summer when we start to do some things and see what they’ve picked up and know and what’s new.”

Grote doesn’t think he’ll have to adjust his style much to coach the girls compared to coaching the boys the past four years.

“I think my personality kind of fits a lot of different people,” he said. “I guess if you know me a little bit, I don’t get too fired up and I don’t get too excited about things back and forth.”

While there’s still a lot to learn and get acclimated to, Grote has an idea of what he wants from his team.

Grote inherits a team full of veteran players as the Trojans didn’t have any seniors this past season and only had two during the 2013-14 season. With so much returning talent, Grote knows there will be high expectations for Arcanum.

“It’s a good thing to have some high expectations I think coming in,” Grote said. “The community, the girls themselves, they want to do well. They’ve had a taste of winning so far, and I think it’s something we can build on.”