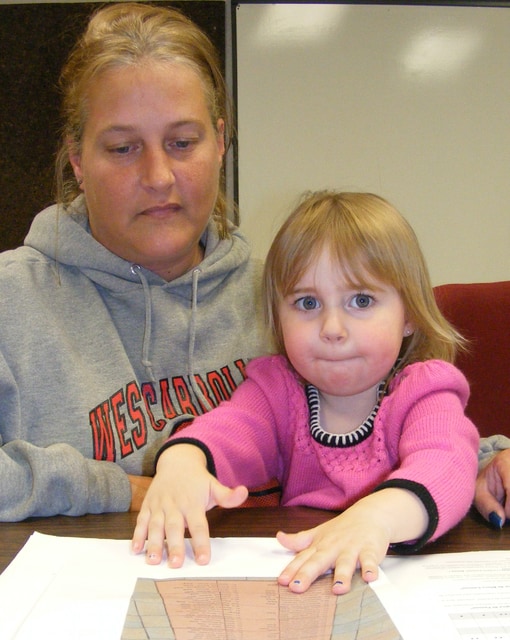 WINCHESTER, Ind. —Bridget Swabb Ashley, who came up with the idea to have a parade welcoming home Vietnam veterans during the recent American Veterans Traveling Tribute here last month, has been named director of volunteers at The Journey Home in Winchester by the new director, James Garringer.

“I will gather volunteers, and I will oversee all volunteers” she said. “We will have officers. I have already gathered 25 volunteers to help The Journey Home [a shelter for homeless veterans] in-house with whatever needs to be done.”

She plans events and fundraisers as well.

She said she has already gathered 25 volunteers to help.

“Board meetings are being held and we’ve been discussing having an obstacle, warrior dash-type thing,” she said. “In another project, I’d like to get youth involved in veterans activities. I am still looking into things. It would be a good youth program.”

Besides the parade that she organized, Ashley is getting things arranged to have an Agent Orange Wall erected.

“I have wanted to do this for a couple of years now,” she said. “I was sitting in the information tent last month one night telling someone about it when a monument park superintendent, Kathy Bond, overheard me. I talked to her after the event was over and she said there is two acres of land in the park with nothing on it but a small World War II monument. She [Bond] jumped right on board to help me do this. Her uncle was a Vietnam veteran.”

The proposed wall will possibly show a soldier walking into the wall.

The proposed dimensions for the Agent Orange Wall is 7 feet tall [but could be bigger’ and 40 inches long.

“The bricks will have names on them and the rest will be marble with gold lettering,” Ashley explained.

People have who passed away from Agent Orange, currently suffering from an Agent Orange type of cancer or someone who is related to these someone with Agent Orange can purchase a brick and put in the wall. The cost is $75.

She said there will also be heroes walk to lead up to the monument paved with bricks, which anybody can purchase

“It can be any veteran, current or past, or the family of the deceased,” she said.

Subsequently, this project will branch out at the park and other heroes walks will be installed as time goes on and lead to other monuments there.

Eventually trees and benches will be bought for the park area, and, at the end of the wall, there will be planters.

Each brick is 4×8 inches. Three lines with 21 characters [but preferably] per line are featured on each brick.

All the money will go through the Randolph County Community Foundation, 213 S. Main St., Winchester, IN 47394.

Those who want to make a donation are asked to make checks payable to the Community Fund. There are tax-deductible forms for them, Ashley noted.

“Turn forms back into Goodrich Park Veterans Memorial Committee,” Ashley said. “I’d like to have all forms turned in by Aug. 1.”

She said in addition to money, donations of labor, flags, flagpoles and ground lighting are welcome.

Since her uncle, Charles Swabb, served in Vietnam in the late 1960s and died of the effects of Agent Orange, Ashley has had a passion for welcoming home others who served in southeast Asia during that conflict.

“A lot of men are still living in Vietnam every day and every night,” she said. “I was on a site recently when a guy made a post asking the other Nam vets where they were last night, because he was in Vietnam and almost all the comments were the same.. They spend their nightmares still in Vietnam even over 40 years later. And, I have heard some veteran friends say, ‘We were killed in Vietnam, we just haven’t died yet’ when they saw the traveling memorial wall for these guys.”