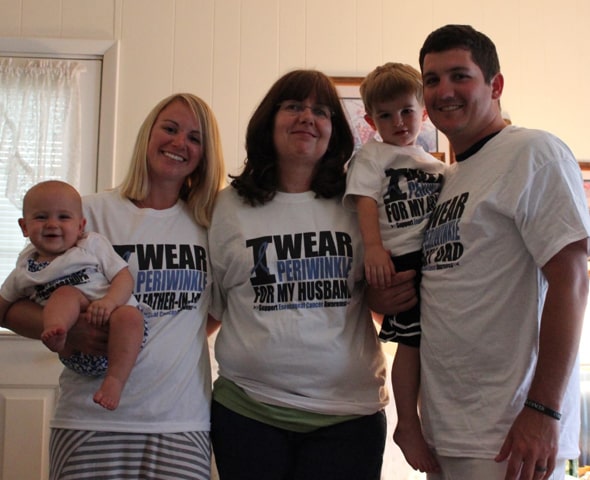 Her husband had cancer of the esophagus. The family is from Greenville.

During National Esophageal Cancer Awareness Month in April, she did something special for the nonprofit agency: She baked more than 3,000 iced sugar cookies, selling them through Facebook primarily, and raised $2,360 which she recently donated to State of the Heart Hospice. The cookies had white icing and covering the top of the cookies was the cancer awareness ribbon that was periwinkle in color – the color for the National Esophageal Cancer Awareness Month. More than 200 people bought the cookies.

The Care Center, which is on the fourth floor of the hospital, has five beds. The furnishings are comfortable and homelike; a family lounge has coffee and cookies available for families.

Julie is no stranger to baking. She spent about 17 years working at Marsh’s Grocery in Greenville, decorating cakes. She loves to bake and enjoys baking for family and friends. Shortly after announcing on Facebook that she was baking the cookies to raise money for State of the Heart, she was slightly alarmed at the number of orders she was getting.

“I was baking almost every day,” she said.

She involved others making it a “team effort.” Helping her were family members, Chelsea Westfall and her stepmother Lori Helman, and good friend Teressa McGuire. Julie’s son, Daniel, helped with the promotional efforts.

“I did the icing and bagging of the cookies,” stated Chelsea.

There were six cookies per bag selling for $5. Each bag was tied with a periwinkle colored ribbon.

“I had a lady from Kentucky buy eight bags of cookies and told me to take them to the Care Center for families. She said her mother had been a hospice patient,” said Julie.

To add to the public awareness of the national month, each member of the family had a T-shirt with periwinkle writing and their relationship with Dion. They also had wristbands stating, “No One Fights Alone.”

Mindy Stebbins, director of business development for State of the Heart, stated, “This is a wonderful expression of appreciation from the Helman family. It is a wonderful feeling for all of our staff to know we were there when we were needed, providing the best hospice care and support possible. We truly appreciate the efforts that everyone put forth on behalf of our agency.”

State of the Heart Hospice, with offices in Greenville, Coldwater and Portland, provides care to patients and families in eastern Indiana and western Ohio who are confronting a life limiting illness. For more information about any of the services provided by State of the Heart, visit the agency web site at www.stateoftheheartcare.org