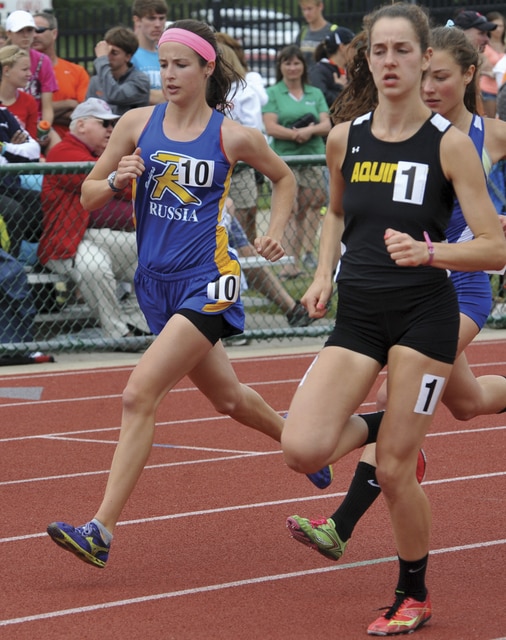 Leah Francis competes in the 100 meter hurdles during Division III finals at Jesse Owens Stadium in Columbus on Saturday.

Emily Borchers of Russia runs the 3200 on Saturday in Columbus.

Russia’s Molly Kearns passes an opponent in the 3200 race.

RUSSIA — When Russia hurdler Leah Francis thinks back to her freshman season, it is hard to grasp what has taken place since.

The senior finished her career at the Division III state track and field championships with a third-straight high finish, even if it was just short of what she had hoped for at the Jesse Owens Stadium track on the OSU campus.

After finishing fourth as a sophomore and junior, Francis was second in the 100 hurdles Saturday in 15.30. Maddy McDermott of Rittman won in 14.95.

“My freshman year, I didn’t get out of districts,” Francis said. “It was a really loaded district. At the time, I never would have expected this. I ran my best time today, so I am happy with that.”

During the race, Francis in lane 5 — saw McDermott in lane 4 out in front of her.

“I really did (think she could catch her),” Francis said. “Because that is my strength. I usually finish strong. But, I couldn’t catch her. It is hard to believe that this was my final hurdle race. It is a tough event, but I have had a lot of fun. This was a good way to go out.”

Russia junior Lauren Heaton found herself in a loaded field in trying to defend her state title in the 400.

“There is nothing I can do about it, except come back here and win next year,” Heaton said. “For sure, it is definitely motivation for next year. I could see (the other girls out in front of her). I knew. I won last year and was sixth this year. I just have to come back here next year and move back up.”

Emily Borchers finished seventh in 11:23.50 after running in the top three in the first half of the race.

“I felt really strong for the the first half of the race,” Borchers said. “I wanted to get up on the podium, so I was happy with my race.”

“I had been to state in cross (country), but not in track,” Kearns said. “It was exciting to be over here. I was pretty happy with the way I ran.”

Kearns hopes to be back next year.

“For sure,” Kearns said. “It would be great to get back over here.”

Francis and Borchers closed their careers by teaming with Heaton and Grace York for eighth place in the 1,600 relay in 4:08.28.

The Raiders had come in with the ninth fastest qualifying time.

“We knew it was going to be hard (to get on the podium),” Francis said. “To be able to go out on the podium — running with all my friends. It was a great way to finish.”

And finish off an amazing three years with Russia track.