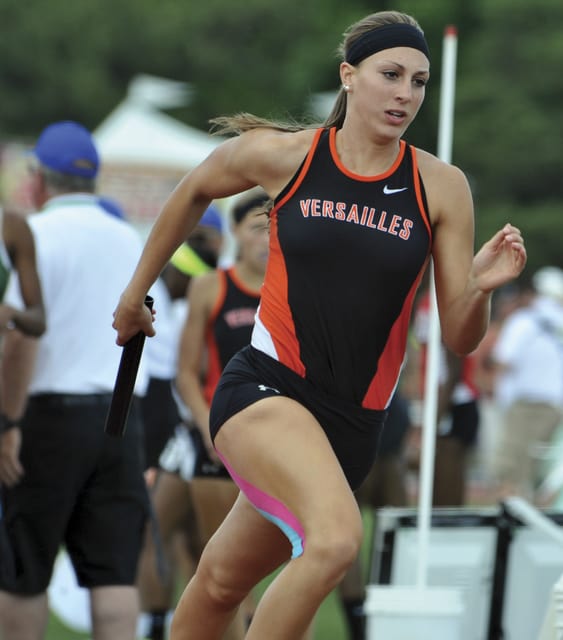 COLUMBUS — As the Division II girls 1,600-meter relay race developed Saturday afternoon at the state track and field championships at Jesse Owens Stadium, it was very clear that something special was developing.

And would you expect anything less from a Versailles girls relay team?

The Lady Tigers put a punctuation mark on the amazing career of Taylor Winner and nearly shocked everyone, before finishing second in the race in a school-record time of 3:56.70 as the team of Haley Winner, Kayley Ruschau, Taylor Winner and Camille Watren took more than seven seconds of their prelim time of 4:03.80 from Friday.

“Indescribable,” Haley Winner said as she watched Watren nearly chase Akron St. Vincent St. Marys down on the anchor leg. “We came in there with the sixth fastest time and look what we did.”

“This definitely makes up for yesterday,” Haley Winner said about the Tigers two relays that didn’t make the finals. “I would take this over not running on those relays. If you had told me at the beginning of the year — heck, if you had told me yesterday, I would have never believed this. Having to only run one race definitely helped us, but I think we just needed to believe in ourselves.”

Haley Winner had the Lady Tigers running neck-and-neck with the leaders after the opening leg.

“I just wanted to get us off to a strong start,” she said. “Watching the final leg (and Camille Watren), I was just yelling and screaming. I knew she was just too far behind to catch up, but what a great run by Camille.”

Ruschau, just a freshman, followed that with one of the strongest legs she has run all year and the Lady Tigers were in third-place at the halfway mark.

“This was crazy,” Ruschau said about running at Jesse Owens Stadium on championship Saturday. “I was so nervous and the other girls were telling me just to calm down. I just wanted to go out and run the best race I could. I knew I had to stay up there.”

“I just knew I had to do it,” she said. “I had to move up and keep closing. This race was just amazing today. To go out with a school record. I was really nervous (watching the anchor leg). What a great anchor leg by Camille (Watren).”

Watren immediately started closing the gap — bringing the crowd to their feet. She did everything she did to catch up as the crowd roared over the final 100 yards.

“I knew I was going to be fresh today,” Watren said. “It’s the final race of the year. You just go out and give it everything you have got. You don’t hold anything back. I was trying to catch them (Akron St. Vincent-St. Marys).”

Watren was still feeling the affects of her run 15 minutes after the race, carrying a “puke” bucket in front of her.

“A little pain is worth it,” Watren said with a smile. “I would have never expected this. Not, with losing Amanda Winner (off the 1,600 relay). I didn’t know who were going to get and Kayley (Ruschau) has stepped up and done a great job.”

Taylor Winner had a lot of amazing moments during her high school career.

She was part of state championship teams in three different sports (volleyball, basketball, track and field) and ran on the 1,600 relay team that won a state title to clinch the team championship two years ago.

And she would tell you Saturday was just another amazing moment she won’t forget.

“I probably wouldn’t have believed it,” Taylor Winner said about her high school accomplishments. “But, you know what. None of it would have happened if it wasn’t for all the great teammates I have had.”

And Watren didn’t want to think about next year just yet.

“Lets take one year at a time,” she said with a smile. “This is something we will have for the rest of our lives.”