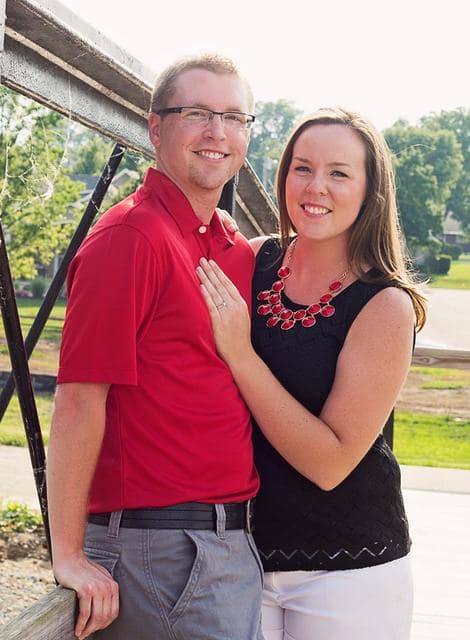 Matthew Staugler, shown with his wife Jen, has been hired as executive director of the Darke County Visitors Bureau.

DARKE COUNTY — The board of the Darke County Visitors Bureau has named a new executive director.

He replaces outgoing director Deanna York, who resigned in April after 15 years with the organization.

Staugler told the Daily Advocate, “I’m very excited to start this journey and humbled by the confidence the board has placed in me. I come from a background in history and tourism, spending the last three years as the associate curator at The Bicycle Museum of America in New Bremen.”

“There are so many wonderful sites in Darke County and I look forward to getting involved in the community and promoting Darke County as a great place to visit,” he added.

Darke County Visitors Bureau President Roger Van Frank said the board had initially interviewed 14 people for the position, and then narrowed the number to three, of whom Staugler was chosen.

“All of the people we interviewed would have worked well,” said Van Frank. “But we’re very excited to have Matthew come on board with us.”

Describing Staugler as a “very bright young man,” Van Frank pointed to his background in history, his confidence and his social media “savvy” as pluses for the bureau and Darke County as a whole.

“Deanna left behind what I would call a ‘great platform,’” he said, “and I think that will benefit Matthew.”

Staugler received his Bachelor of Arts degree in History from The Ohio State University in 2012. He is currently enrolled at Purdue University, pursuing a Master of Science degree in Communication.

His wife Jen is a teacher at Shawnee Local Schools in Lima. The two were recently married, in December 2014.

Staugler said he and his wife are hoping to move from Mercer County to a new home in Darke County soon.

For more information on the Darke County Visitor’s Bureau, visit the organization’s website at www.visitdarkecounty.org.