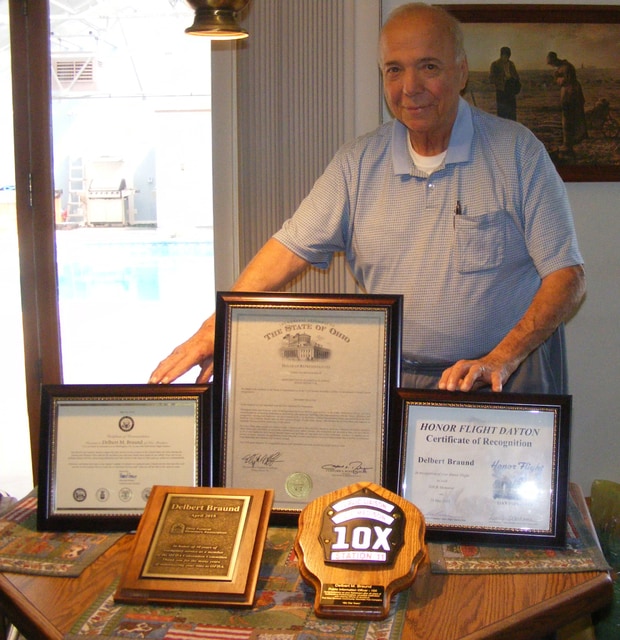 NEW MADISON — Delbert Braund is on the mend and has been one busy man, collecting awards and receiving accolades for the work he is done with the New Madison Fire Department and the Ohio Funeral Directors Association.

“The Honor Flight was a one-day trip” said Braund. “The motivation keeps you going. My son, Del Jr., went with me. He thought I’d need a wheelchair or a cane, but I walked.”

“I went to Korea in January 1951 as a 20-year-old, snot-nosed kid,” he said. “Then I served two tours in Vietnam and Southeast Asia. I don’t talk about my first tour with Air America. It was strictly an outfit that wasn’t there. I was there from 1966 to December 1967 and was in the States for 47 days before my outfit got deployed on the Pueblo Crisis. The second tour was from February 1968 to September 1968.”

Braund grew up in Phillipsburg, Pennsylvania, and graduated from high school in May 1948, leaving for the Air Force two months later.

“I originally first came to Ohio in 1954,” he said. “I married a girl [Lois Mogle] from here that I met in service. We were stationed in Texas.”

She is the mother of his two children, Gwendolyn [now Mrs. Barry] Tinkle and Del Jr. (wife Karen).

Son Del Jr. is a retired sergeant from the Montgomery County Sheriff’s Department, where he served for 28 years.

In addition to children, Braund has two grandchildren. He also has 12 stepgrandchildren and two stepgreat-grandchildren through his wife, Jane Burgess Schneider Braund, who died in February 2014 of cancer.

“Jane was from Whitewater, Indiana,” he said. “We were married for 30 years.”

Braund’s own health woes began on July 30, 2013, when he suffered a massive heart attack. The following Sept. 3 he underwent an aortic valve procedure and three bypasses and since then has had six stints in rehab.

He said the driving force behind his getting better has been his two children.

“Last July, I didn’t care if I lived or died,” he said. “Then on Aug. 3, sitting in church, a little voice said, ‘Get up, you can do it.’ I took communion. I was on my walker and that was the day I decided to live and do what I was supposed to do…take my medications and listen to my kids. I have been off the walker since January this year.”

He has even started working again. The former owner of Storch-Braund Funeral Home in New Madison, he now assists Kreitzer’s in Arcanum and Oliver-Floyd Funeral Home in Greenville as he is needed.

Braund said he career in firefighting actually started when he was in Pennsylvania before he went into the military.

When asked about his memorable fires, he commented, “The Cornell fire in Greenville, the County Home and tile mill fires in Greenville on the same night, the elevator fire and the old bank building fire in New Madison.”

He said he never suffered any injuries while fighting a blaze.

One of his most memorable mutual aid calls he went on with rescue was when the tornado struck in the Arcanum area around Thanksgiving in 1992.

“I ran the command post for it,” Braund said.

After he came home from service, he worked locally for three years.

“I then went to Sinclair College at the age of 40 and got a degree” he said. “Then I went to the Cincinnati College of Mortuary Science and became licensed. I became associated with the funeral business in 1973 and became a partner with Ed Storch. I bought the business on Jan. 1, 1978, and sold it in 2007.”

He is still involved with the convention committee in Columbus, and is escorted there by one of his children, who won’t let him drive outside of New Madison.

“I am still chairman of the Tri-Village Rescue Squad,” Braund said. “My first run was Oct. 1, 1973 and I retired from the active roster at the end of May 1996. A trustee at-large had resigned June 1996 and I was appointed to his potion in July and was made chairman of the board. I have been elected every year since. If I couldn’t drive, they would pick me up and drive me. They wouldn’t let me resign.”

“I used to dispatch at the fire department if they got an emergency and I’d probably go back and help,” he said. “It was 24-hour on-site coverage for rescue, but fire still has all volunteers. We outgrew the old building and are now at our new building behind the Dollar General store.”

For many years, he was responsible for the Fourth of July and the school parades that took place in New Madison. And, he served on the Darke County Veterans Commission for 11 years.

“I’ve had a good life. I tried to give back to the community and people,” he concluded. “I enjoyed every bit of my years here. By the grace of God, I’m still here. The people at church [New Madison United Methodist] call me ‘Miracle boy.’”