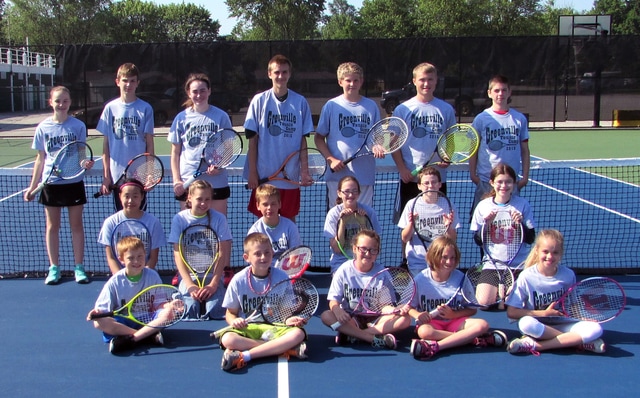 GREENVILLE – The Greenville Youth Tennis camp was well served with a total of 18 kids hitting the nine new courts at Greenville Senior High. The camp was available for students entering grades 3rd-9th .

“This is all a good tune up for the junior high program we have, as we definitely are emphasizing the fundamentals. Some of these kids have never even picked up a racket,” Koontz said. “We had good numbers, the kids listened and most importantly enjoyed it. We even had videos set up in the gym in case it rained for instructional purposes.”

The skills the campers worked on each day were differen, but included the forehand, backhand, volley, overhead, keeping score, tossing the ball up and correct stances. They also had a singles and doubles tournament based on ability. Campers enjoyed three games: King of the Court, Sharks and Minnows and The College Game.

“The biggest improvement from day one to day five was their form on the backhand and service motions,” said Kiser.”They did surprisingly well with the serve, and had the most difficulty with the backhand. At this age range we are emphasizing the two-hand backhand, due to the size of the racket.”

“Fill these courts up this summer, just because camp is over don’t quit playing,” he encouraged.