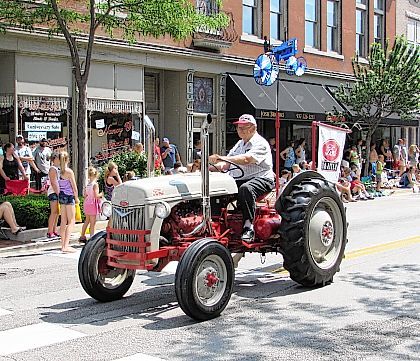 Elbert Wilhelm, of Piqua, drives an antique tractor in the Grand Parade Saturday at Versailles Poultry Days just moments before he loses control and goes into the crowd, injuring four spectators.

VERSAILLES — The driver of the tractor that injured four spectators at a parade Saturday will be cited for a traffic violation, Versailles Police Chief Mark Humphreys said Monday.

Humphreys said the 82-year-old Piqua man, Elbert Wilhelm, will be cited for operating without reasonable control.

Wilhelm was participating in the Grand Parade Saturday at Versailles Poultry Days when he lost control of the antique Ford tractor he was driving, and it went into the crowd.

Injured were Thomas Hamilton, 64, and his wife Kathy Hamilton, 63, of Greenville, and their grandsons, Carson Hamilton, 7, and Aiden Hamilton, 4, also both of Greenville. All four were transported by CareFlight after being taken by ambulance from the scene of the crash.

The tractor was just half a block past the announcers’ stage when it went into the crowd lining the streets.

“(Wilhelm) was throttling it and revving the engine up and down, and he lost control of it,” Humphreys said. “He swerved to miss the (parade unit) in front of him and went into the crowd.”

Wilhelm was not injured in the collision.

Humphreys said another paradegoer sustained minor injuries in the incident, but she refused treatment at the scene.