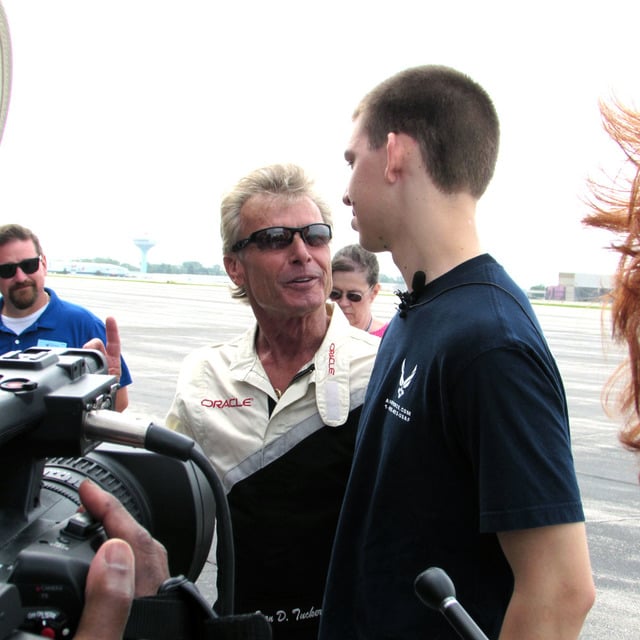 Daniel Dendler (left) is all smiles upon landing. The Arcanum resident was allowed to man the controls two times during his flight.

These confident, enthusiastic words were uttered by Daniel Dendler, 17, of Arcanum, when asked if he was ready for a second flight.

An essay written by Dendler earned him the opportunity to soar among the partly cloudy skies Thursday morning at Dayton International Airport in Vandalia, now in preparations for the annual Dayton Air Show this weekend.

Sean D. Tucker, pilot and chairman of the Experimental Aircraft Association’s (EAA) Young Eagles Program, took Dendler on a flight in a two-seat Extra 300 L aircraft. The propeller-driven plane was piloted by Tucker with Dendler occupying the front seat.

Three media members and Dendler’s father Bill flew in a companion plane to cover the event.

One of 27 local youths who submitted essays, Dendler’s piece was chosen as the winning entry, earning the young man an opportunity to spread his wings for real.

During the flight, Tucker and his passenger executed a number of acrobatic maneuvers, including barrel rolls and flying upside down, often leaving a smoke trail in their wake. The flight lasted approximately 30 minutes.

Following the flight, Dendler spoke to the press gathered to cover the event. His excitement was evident.

“Flying upside down was really cool. That was a lot of fun,” Dendler said.

“It’s weird to see all the streets I’ve driven my entire life, from being around here because this is where I grew up, and seeing them from the air is pretty neat.” he added.

When asked about his time at the controls, Dendler remarked, “I was expecting it be more challenging, but basically you just sit there and kind of hold it.”

Though he has previously been a passenger on commercial flights, this was Dendler’s first flight in a plane of this size.

Pointing out the height difference between the two, Tucker commented that Dendler was the “tallest” Young Eagle he had the honor of flying with, but also said that he had “great hands, but most importantly, great passion.”

Contrasting flying with driving, Tucker said, “We got to speeds up to 220 miles per hour, and in the sky, that’s legal.”

Dendler has enlisted in the United States Air Force and will enter the service next July after finishing his senior year at Arcanum High School. He will initially train for military security but eventually hopes to receive an officer’s commission and become a pilot.

For exclusive videos of the flight, go to the Daily Advocate’s Facebook page at “Advocate360.”