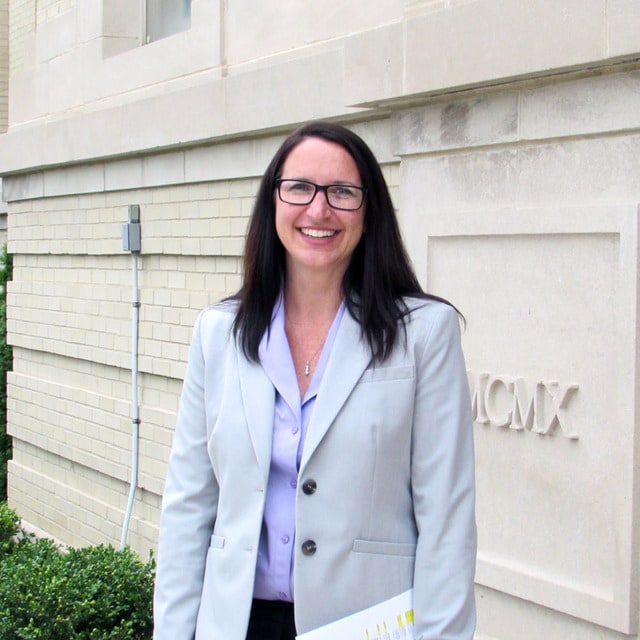 Superintendent Doug Fries presents a commendation to Greenville pole vaulter A.J. Frens at the Board of Education meeting Thursday.

Jody Harter was named the new principal of Woodland Primary School at Thursday’s Board of Education meeting.

GREENVILLE — Jody Harter was named principal of Woodland Primary School at the Greenville City Schools Board of Education meeting Thursday.

Harter takes over for Jeffrey Cassell, who was hired as principal for Greenville High School. She served as assistant principal at Woodland for the 2014-2015 school year.

A 1995 graduate of Greenville, Harter bring 12 years of teaching and administrative experience to the job, with stints at Anthony Wayne Preschool and Columbus, Ohio, Public Schools.

She is a graduate of Ohio State University, with a Bachelor’s degree in Child Development. She received her teaching license from Ashland University and a Masters degree in Administration from the University of Dayton.

Harter lives in the school district with her husband, Todd, and their three children.

“I was born and raised here, so it’s good to teach in my home district,” she said.

Looking forward to her first year as Woodland principal, Harter said she is “most excited” about rolling out a new initiative in which each first-grade student will receive an iPad.

“Our dream is to add them to more grade levels as funding allows,” she said.

She also remarked that she was looking forward to the eventual move to the new K-8 building currently under construction.

Harter thinks her year as Woodland’s assistant principal has prepared her well for the position.

“I was blessed to work with Mr. Cassell last year,” she said. “He was a great mentor to me. And I’m excited for our district for him to go to the high school. I think he’ll be very effective at the high school level.”

She also described herself as “very excited” to be a part of the administrative team that Superintendent Doug Fries and Assistant Superintendent Laura Bemus are building.

In other moves, the board approved a resolution to place a renewal levy on the ballot for the November 3 election.

The five-year renewal levy is for the purpose of current expenses at 5.50 mill tax on each dollar, equaling 55 cent per $100 of valuation. If passed by school district voters, the levy would commence in 2016, with first payment due in 2017. A renewal levy would mean the tax would remain the same for district residents, it’s not a new tax.

Based upon figures provided by the Darke County Auditor, the annual revenue received from the levy is estimated at $1,882,700.

The board also set aside $400,000 to be used toward funding the Friends of Harmon Field project, which seeks to renovate the district’s football, soccer and track facilities. The allocation is conditional, contingent upon the raising of $1 million dollars by the group, at which point the money would be released for use.

The board also presented a certificate of commendation to Greenville High School Sophomore A.J. Frens, who placed fifth in the State Division I pole vault competition in Columbus.

Greenville Board of Education meetings are open to the public. They are held at 7 p.m. in the Anna Bier Civic Room at St. Clair Memorial Hall on the third Thursday of each month.

For more information about the Board of Education or to contact board members, go online to http://www.greenville.k12.oh.us/BoardofEducation.aspx.