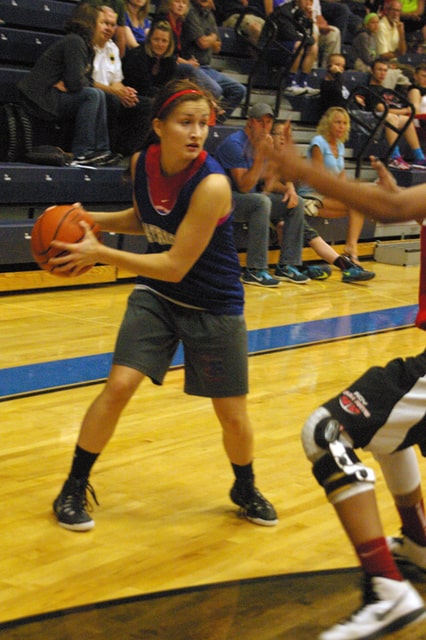 Tri-Village’s Shelbey Dowler drives to the basket during the Tri-Village varsity girls basketball shootout on Friday in New Madison.

“I thought it was a great event for all teams involved,” Tri-Village girls basketball coach Brad Gray said.

Tri-Village had a strong performance during the shootout as the Patriots went 6-1 over the two days of competition. The Patriots’ lone loss was a two-point loss to Fort Loramie.

“I was very pleased with what we were able to do for the most part,” Gray said.

For Tri-Village, the shootout was one of the last big events of a busy summer. The Patriots will play their last game of the summer on June 29, concluding a month that includes 32 games.

“Overall it’s been a great summer for us,” Gray said. “We’ve had some nice wins and some disappointing losses, but the most important thing is we’ve definitely grown over the last month.”

Tri-Village lost some key players to graduation and also has a couple players sidelined with torn anterior cruciate ligaments. The injuries have affected Tri-Village but have given other players opportunities to shine.

“We’ve got an opportunity for some kids who are a little bit younger to step in and show what they can do,” Gray said.

Gray is happy with his team’s progress thus far and thinks the Patriots have a nice mix of veteran leaders and young talent. In the past week he’s seen a lot of growth, especially from the freshmen and sophomores.

“Those young kids are definitely taking advantage of their opportunities,” Gray said.