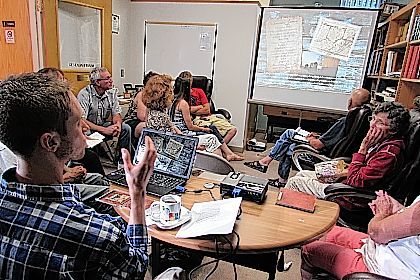 Connor Keiser, left, shares his family history of Longtown, the first free black settlement in Ohio, which stands in Darke County. Keiser is part of a preservation group working to preserve and restore what little is left of the community.

NEW MADISON — More than a dozen people squeezed into the little genealogy room in the New Madison Public Library for a presentation by Connor Keiser on Darke County’s historic Longtown settlement Tuesday evening.

Keiser is a fifth-generation grandson of James and Sophiah Clements (spellings vary), who were the founders of the Greenville Negro Settlement, which would later become known as Longtown. The town was the first black settlement in Ohio.

The couple settled in Darke County in 1818 and set up the family farm. They went on to become parents to 10 children — five boys and five girls. Keiser said he traces his ancestry back to their son John.

Clements was the first free person of color to buy land in Darke County when he purchased 320 acres of government land in 1822. The home and farmstead still stand today. Clements donated land for the church, cemetery and school to be built, which were the foundation of the settlement.

Keiser noted that the referred to his fifth-degree grandfather as “colored” because that was how the man referred to himself. He was of mixed race, with African, European and Indian ancestors.

Keiser showed documents that listed Clements as “mulatto,” which was the term used for persons of mixed racial heritage.

Along with Clements, the settlement was founded by Thornton Alexander and Reuben Bass. The settlement straddled the Ohio-Indiana state line, Keiser explained, so if one of the states passed a law against the free people of color, they could easily pack up and shift to the other side of the state line.

The settlement was a key stop on the Underground Railroad, the network of safehouses used to help runaway slaves escape captivity. Keiser said while in the settlement, the escaped slaves were even able to attend school.

The Union Literary Institute was built in the settlement as a school for men of all races. Students worked the farm to pay for their tuition and learn practical agriculture. Keiser noted that the rare, integrated school was attended by men who would go on to prestigious positions, such as Hiram Revels, the first black U.S. Senator. He represented Mississippi in the Senate in 1870 and 1871 during the Reconstruction Era.

The Clements house that stands on the site today was built around 1850, and the Union Literary Institute Preservation Society is working to preserve and restore the house and farmstead, along with the school, to honor the historic importance of the site. The farmstead was added to the National Register of Historic Places in 2001.

Keiser plans additional talks about the settlement in upcoming months.