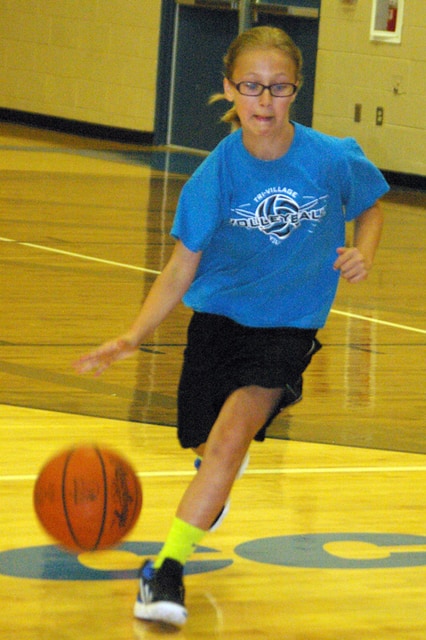 NEW MADISON – Tri-Village saw an increase in the number of girls attending its youth girls basketball camp this year.

A total of 50 girls in the third through eighth grades, which is one of the highest numbers the camp has had under coach Brad Gray’s leadership, participated in the four-day camp in New Madison.

Gray and his Tri-Village varsity girls basketball players led the youth campers through a number of stations that worked on ball handling, passing, shooting, post moves and defense.

“I think they’re doing a great job,” Gray said of the campers’ progress throughout the week.

Of all the skills the campers learned throughout the week, Gray hopes they learned about form and footwork.

“Our focus really is form and footwork, and that’s not just with shooting a basketball,” Gray said. “That’s with everything we do. We’re really focusing on those two words – form and footwork.”

Form and footwork are areas of focus even for the Lady Patriots’ high school players.

“I think especially in girls basketball footwork is not very good,” Gray said. “That’s something our program really tries to focus on.”

Tri-Village’s high school players were key components of the camp as they served as coaches of the youth players and worked as referees in the games.

“They’re doing a fantastic job,” Gray said. “We have them coaching. We have them refereeing. What that does, it gives them a chance to see the other sides of the game. Not just the playing aspect but now they kind of know what it feels like to be an official and they know what it feels like to be a coach. I think it’s good for those young kids to kind of be put in those roles so they understand them a little bit better.”