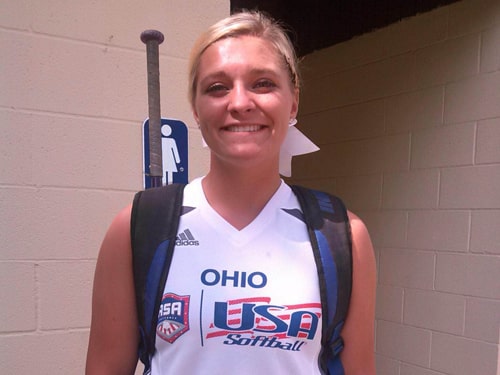 GREENVILLE – Greenville’s Ally Russell competed for the Ohio All Stars against the USA Junior Women’s National Team this past week.

Russell and other top players from across Ohio took on the junior national team in a doubleheader on June 18 in Ashland. Like Russell, most of her Ohio teammates just graduated high school while the national team players were college players, mostly from the Pac-12 Conference or Southeastern Conference.

“It was very cool,” Russell said. “It was kind of scary at first because they were all college players.”

Russell got to hit against the national team and also pitched a scoreless inning.

“It was very nerve-racking at first,” she said. “It was cool to even be on the same field as some of those players.”

Getting to play against such tough competition was a blessing for the Greenville High School graduate. It let her see what she can handle and what she needs to work on as she prepares to play for Wright State University.

“I got a little more confident I think,” Russell said.

Russell was one of 16 girls to be named first team all-North Region. She was joined by players from Illinois, Michigan, Ohio and Wisconsin. The Greenville graduate was one of four pitchers to make the region’s first team.