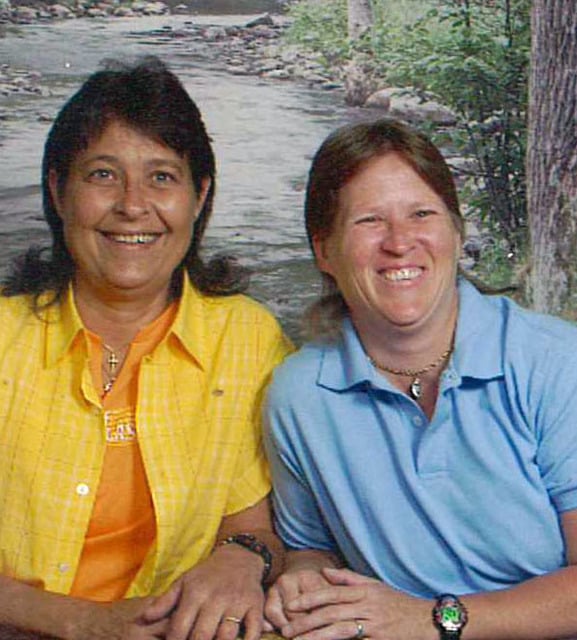 The Daily Advocate’s Facebook post reporting the event generated commentary from people who expressed approval, displeasure, and even those who felt the story itself was not newsworthy.

Facebook user Chris Chapa wrote, “I know some people might not care, but some others do. I for one, am happy for this post. As a person in a same sex couple that is going to get a marriage license tomorrow, I wasn’t sure how open our county would be to giving out same sex marriage license. This puts me at ease and makes me feel so much more comfortable going to get ours.”

Kimberly Crawford Stigler commented, saying, “I seriously am not upset by gays getting married, but this really has nothing to do with lifestyle choices and everything to do with our constitution and state rights.”

Karen Lowder added, “Why is this news?”

The women at the center of local history are Gloria Applegate, 51, and Chris Wright, 57.

The two New Madison residents have lived together since 2002, and had a wedding ceremony conducted at a church in Dayton in 2003, though their union was one not legally recognized by the state of Ohio at that time.

The couple is planning to repeat their ceremony once more on July 18.

In an interview with the Daily Advocate, Applegate said, “Now we can actually do it right, and this time be legal, so we are both really excited.”

Applegate said she and Wright met at Whirlpool Corporation in Greenville, where they were both employed. Applegate still works there; Wright is home on disability.

Wright was previously married to a man. From that marriage, she has three children, now grown, with seven grandchildren and two great grandchildren.

While Wright said she knew she was a lesbian from a very early age, Applegate was in her early 20s before making this realization.

“For a long time, for years, I hid the way I was. I was unhappy,” she said. “Then I met Chris. After meeting her, she helped me realize I don’t have to be unhappy. I don’t have to hide who I am.”

Applegate recalled the moment they realized they could legally wed.

“Chris was babysitting. As soon as I saw [the Supreme Court decision] on TV, I called her, and she said, ‘We’re going.’”

“It should have been equal rights for all of us a long time ago,” Wright added.

In response to those who say that same-sex marriage is sinful, Applegate said that while she disagrees, she would never ask a church or a pastor to go against their beliefs.

“It’s up to the discretion of the church if they don’t want to do that — it’s their decision,” she said, noting that there would be no problem finding a church that would perform a ceremony.

Applegate said she and her partner have received nothing but love and support from family, friends and co-workers.

“When the news about us getting a marriage license came out, we had people bombarding us, asking for wedding invitations,” she remarked.

She expressed appreciation for her hometown, saying, “We love it here in New Madison. We’ve lived here for the past 11 years. It’s a very nice town. The folks here are awesome.”

As for her partner, Applegate said, “I can’t imagine my life without her. She’s my best friend, my soulmate, my partner for life. I can’t ever remember being this happy — ever.”