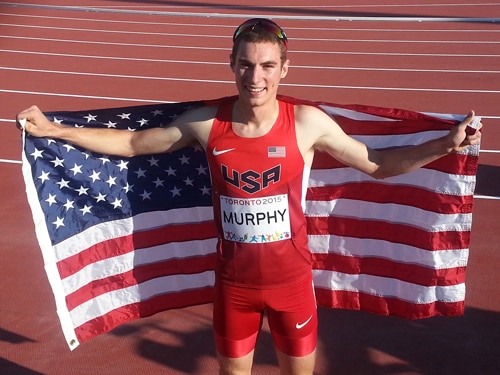 BEIJING – Tri-Village graduate Clayton Murphy will represent the United States in the 800 meter run at the International Association of Athletics Federations World Track and Field Championships in Beijing, China.

Murphy was the United States’ first alternate for the World Championships after he finished fourth at the USA Track and Field Championships in June in Eugene, Oregon. He was named to Team USA for the worlds on Monday along with fellow 800 meter runners Erik Sowinski and Casimir Loxsom as national champion Nicholas Symmonds, the runner up at the 2013 world championships, was left off the roster after a dispute with USA Track and Field about uniform sponsorships.

“Our heart goes out to Nick Symmonds,” Akron head track and field coach Dennis Mitchell said, according to the University of Akron’s official athletics website. “He has been the USA’s best and he deserves to be there. However, this is a great opportunity for Clayton and we are very proud of him.”

This will be the third time that Murphy, who runs collegiately at Akron, will compete for the United States.

Murphy will be one of two Akron athletes competing at the IAAF World Championships. Fellow Zip Shawn Barber, who also won a gold medal at the Pan American Games, will represent Canada in the pole vault.

“You would say that it is a dream to be able to do what Clayton was able to do so far this year with two all-American honors, being on two USA teams and winning a gold medal,” Mitchell said, according to the Akron athletics website. “I don’t know what to call it now that he additionally gets to represent his country for the world championships, except, Wow! What an amazing honor. This will be fun having two Zips at the meet.”