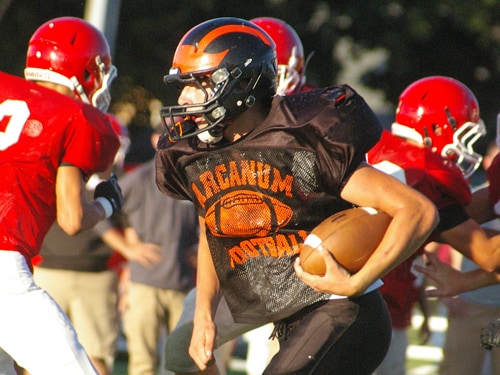 “I wish we would have had another quarter because I thought we were really starting to click,” Powers said.

The Arcanum football team played host to Milton-Union in the final scrimmage of the season Friday and trailed 21-13 through three quarters of varsity action before the backups took over. But the Trojans were starting to click in the second half, Powers said, and building momentum for the quickly approaching regular season.

Things didn’t start off as well as Arcanum wanted as penalties, missed blocks and missed tackles all held back the Trojans, who found themselves down 21-7 by halftime.

“The thing that got us there is blocking and tackling in the first half,” Powers said. “We didn’t tackle real well. Had a lot of missed tackles and you could see it watching the game. We had a guy bottled up, and we didn’t bring him down. And blocking. It’s a simple game … blocking and tackling. I don’t think we blocked real well in the first half, either. I thought they kind of smacked us in the mouth. We weren’t sustaining our blocks; we weren’t staying on people.”

Milton-Union started out with the ball and went 67 yards in six plays during its opening drive to score the night’s first touchdown and give the Bulldogs a 7-0 lead.

Arcanum’s offense, meanwhile, got off to a slow start and had to punt after a three-and-out that included an offside call on the Trojans.

Milton-Union’s offense continued to move the ball during its second drive but ended up stalling inside the red zone and turning the ball over on downs.

On the second play of the ensuing possession Arcanum quarterback Daniel O’Donnell ran 82 yards for a touchdown to cap off a two-play, 88-yard drive that tied the game at 7-7 with 5:19 left in the opening quarter.

Momentum continued for Arcanum on the next possession as Christian Layman intercepted a Milton-Union pass and returned it into Bulldog territory.

Things turned quickly, however, as two plays later Milton-Union intercepted a pass and returned it for a touchdown, giving the Bulldogs a 14-7 first quarter lead.

Milton-Union added to its lead in the second quarter with a three play, 76-yard drive that culminated in a 71-yard touchdown run to make it a 21-7 game.

The score remained 21-7 until the third quarter when Arcanum started the second half with a 12-play, 89-yard touchdown drive with O’Donnell running for his second score of the night to cap off the almost six-minute possession that made it a 21-13 game.

“Coming out in the third quarter the way we did I was really, really proud of that,” Powers said. “Proud of that heart and effort. I wish we could’ve keep playing a little bit.”

That was the last of the scoring for the varsity teams, who watched from the sideline as the backups played the fourth quarter.

After forcing a turnover on downs by Milton-Union, Arcanum’s backups scored in their first possession with a 39-yard touchdown run to cut the Bulldog lead to 21-19.

Milton-Union’s backups then scored two touchdowns before the night ended to make it a 35-19 final score.

“I was proud of the effort,” Powers said of his team. “West Milton, good football team, they’ve got a good team this year. They were physical, and we matched their physicality for the most part. We just had again some busted plays.”