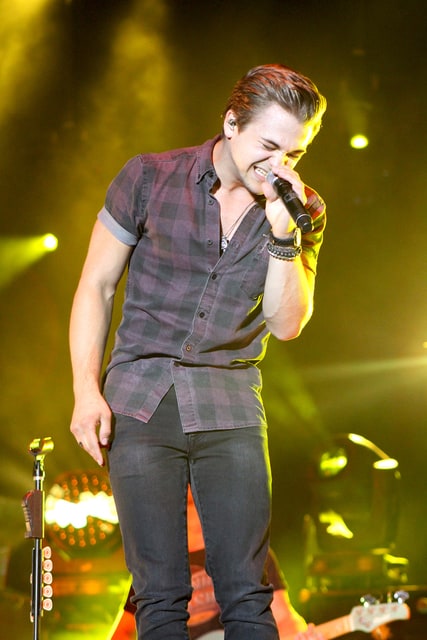 GREENVILLE – With approximately 75 percent of tickets sold before Sunday evening’s concert with Hunter Hayes at the Great Darke County Fair, the impending rain had folks nervous ahead of time, and rightly so with an almost two-hour delay getting started.

“The first storm looked like it would hit, but we only got a few drops of rain,” stated Brian Rismiller, Darke County Fair Board member. “With the second storm, we wanted to delay just in case…After the stage collapse in Indianapolis a couple of years ago, we just wanted to take precautionary measures to make sure another tragedy like that doesn’t happen.”

Once the lightning began, Darke County Sheriff’s deputies ushered everyone under the Grandstands for safety, where concert-goers waited patiently for the storm to pass.

Darke County Sheriff’s Office also assured other safety measures prior to the start of the concert, collaborating with the fair board, entertainer and promoters to be sure that everyone was kept as safe as possible during the concert.

“We learn each year, and apply that to the next year’s fair,” stated Chief Deputy Mark Whittaker with the Darke County Sheriff’s Office. “We work with the entertainer, promoter and fair board to strike a balance between what they’d like to see and what’s going to maintain a safe environment.”

Other improvements this year included the addition of two jumbo screens on either side of the stage, said Rismiller, which were sponsored by SVG Chevrolet of Greenville, he added.

“We’d been talking about adding screens for several years,” Rismiller commented. “I think it’s a nice improvement. I saw some folks taking photos and video of the screens, so it seems like people enjoyed them.”

After the storm passed, concert-goers returned to their seats to enjoy the show, which Hayes announced would still go on in it’s totality, despite the late start.

According to Rismiller, the fair board is already considering entertainment options for next year, and will begin working towards filling the spot as soon as this year’s fair is over.