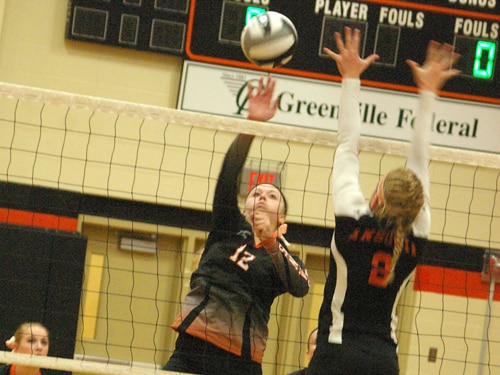 After a back-and-forth start to the match, Arcanum got stronger as the night went on and was dominating by the end of the evening.

“It’s so easy to become lax, and you don’t want that to happen,” Arcanum coach Terri Day said. “They stayed strong all night long. That’s all I want them to do. They have the abilities. They just have to stay at that level throughout the whole match.”

There were nine ties in the opening game as neither team could pull away early. Ansonia led by as many as four points in the set, but Arcanum starting rolling late and scored 10 of the final 15 points in the game to win the first set 25-20.

“The first game we played them pretty tough,” Ansonia coach Jason Hemmelgarn said. “The second and third Arcanum just kind of got on a roll. They’ve got some really strong hitters, and I think their serve really got stronger in the second and third games, too. Forced us into a lot of bad passes, which makes it hard to run an offense when you can’t pass the ball. Give a lot of credit to them for serving us out of system and hitting the ball really well.”

Arcanum led throughout the second and third games. The Trojans scored the first three points of the second game to get going, and then Alexis Abner’s strong serving helped them extend their lead further to 10-2. Arcanum led by at least four points the rest of the way en route to a 25-15 victory to go up two games to none.

“I think our defense was very, very good. We covered them well,” Day said. “Saturday we struggled with dinks and stuff, and they had that covered tonight.”

In in the third game Arcanum scored the first two points and never looked back as the Trojans easily won 25-12 to sweep the match.

“Lydia (Sink) got some nice swings up there, but even when she did they did a nice job of digging a lot of them up,” Hemmelgarn said of Arcanum’s defense. “They did a great job of covering the floor, getting in position and really getting some good digs up.”

Shai Robinson led Arcanum with 11 kills in the match, and Brittany Kinney had 14 assists.

“They’re going to be I think one of the better teams in the league this year,” Hemmelgarn said. “So I kind of expected that coming in, but I thought we would put up a little bit better of a fight.”