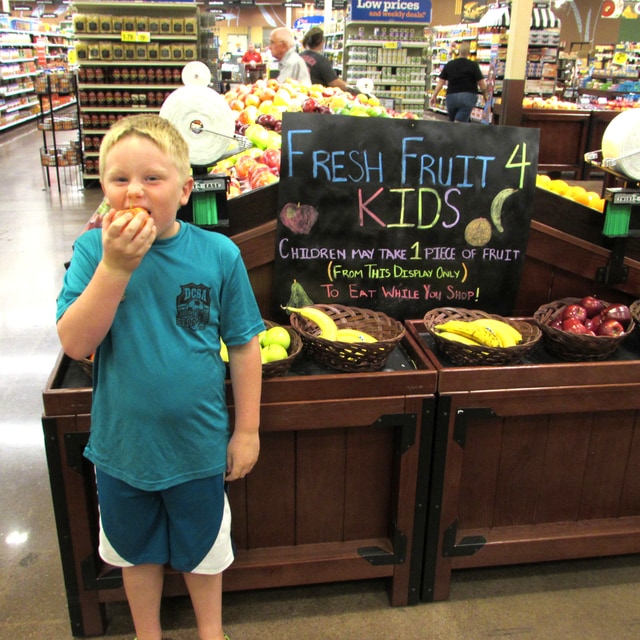 GREENVILLE — Invariably, during a grocery shopping outing, parents are bound to hear at least one of their children say the dreaded words “I’m hungry!”

The produce department of Kroger Supermarket at 200 Lease Avenue in Greenville is now offering free fruit to kids 12 years of age and under.

According to Greenville Kroger Store Manager Barbara Matthews, the notion was first proposed by store associates during a recent meeting of the store’s “Inclusion Council,” in which associates from various departments offer ideas on how to improve associate retention as well as increase customer retention and engagement.

“Someone saw the idea elsewhere and asked if we could do this, and we decided to try it here,” she said. “So far it’s been very well received.”

She added, “We look at it as a healthy alternative for kids who come in the store, as opposed to, say, cookies.”

The “Fresh Fruit 4 Kids” display has only been up since this past Tuesday, but already word of the store’s largesse has begun spreading quickly via social media.

How fast has word spread? “Really fast,” said Matthews. “And it wasn’t us who did it. A customer took a photo and posted it on Facebook. Since then it’s really taken off in the community.”

For the moment, the store is offering four different varieties of apples, as well as bananas. Matthews, who has been store manager at the Greenville Kroger just shy of a year, says that the selection may change as time passes.

“We may switch it up, depending on what’s available. We’d also like to reflect what’s seasonal,” she remarked.

Matthews said she is unaware if any other Kroger locations in the region are doing the same thing.

“I’ve not heard of any of our sister stores doing this, but they may be,” she said.

How long will the free fruit giveaway at Kroger last? Matthews said, “Based on the feedback we’ve gotten from everyone so far, we plan to keep it up as long as the parents and kids continue to like it.”