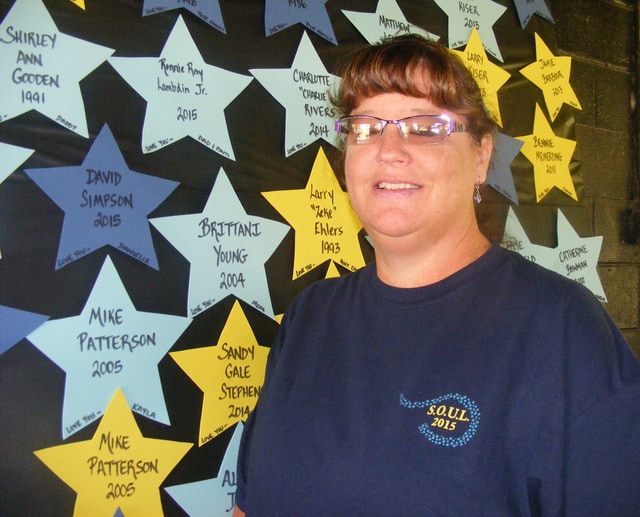 Editor’s note: This is the sixth installment in a nine-part series on SOUL Walk.

UNION CITY, Indiana — Angie Noggler of Fort Recovery, Ohio, participated in the SOUL (Survivors of Unspeakable Loss) Walk for the first time this year in memory of her daughter, Brittani Young, who died March 22, 2004, at the age of 13.

She died of leukemia after a six-year battle with it.

Noggler used to participate in the Leukemia/Lymphoma Society Walk in Dayton for five years after her daughter’s death.

“I have never been here before so I thought I’d come,” said Noggler, seated on a picnic table in a shelter house at Harter Park, where the event took place on Sept. 20. “It does get easier after a time. There is no date set [for grieving]. It’s hard on her birthday, at Christmas, because she loved it, and on the date of her death. I used to cry a lot, but now not like I use to.”

Prior to the walk, she said she thought the walk would help. And, afterwards, she stated, “This is so surreal. It brought back memories.”

During the butterfly release afterwards, one landed on her two fingers and wouldn’t leave.

Brittani, she said, was sick from 1998-2004 and was in remission 3 1/2 years. Then, the cancer returned in 2003 after which she underwent a bone marrow transplant, and got infection in her lungs, known as idiopathic pneumonia.

“She fought hard; her body was tired,” Noggler said. “Her lungs were wore out because of the ventilator.”

Her oldest child would be 24 on Jan. 31. Her two other children are Brittani’s siblings, Derek Young, 21, and Ashley Young, 18.

Noggler has been a home health nurse for eight years.

“I work in Darke County and with a family in Versailles,” she said.

Her husband, Mark, she indicated, is supportive of her in her endeavors.

“He watched the other kids and helped me graduate from nursing school,” said Noggler, who attended the walk alone.