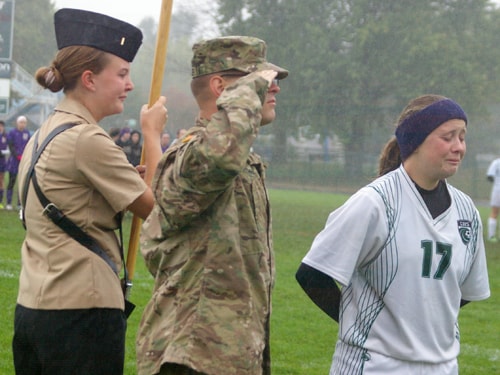 GREENVILLE – Moreah Donthnier fought back tears as she described the emotions of seeing her brother, Private First Class Micah Donthnier, who surprised her by returning from deployment in Afghanistan just minutes before Greenville’s girls soccer game Saturday.

“No words can describe it,” she said. “I’m beyond happy.”

Micah Donthnier returned home to Greenville after seven months in Afghanistan with the United States Army. He arrived back in town just a couple hours before Greenville’s game against Eaton.

After both teams’ rosters were announced, Micah Donthnier walked on to the field for the Star Spangled Banner. His sister, who was standing at midfield, sprinted across the field and embraced her brother as the public address system announced his return home.

After being apart for nine or 10 months, Moreah Donthnier said she immediately recognized her brother from across the field.

The on-field reunion was planned by the siblings’ mother, Shalissa Donthnier.

“I was planning on surprising but just not quite of this magnitude,” Micah Donthnier said. “This got sprung on me at last moment. But I’m like, all right, can do.”

After the emotional reunion, Greenville and Eaton squared off on the field. Eaton took a 3-0 lead in the first half and survived Greenville’s second half charge to defeat the Lady Wave 3-2.

Micah Donthnier will be home for a couple of weeks, he said, prior to returning to Fort Campbell for another training cycle.