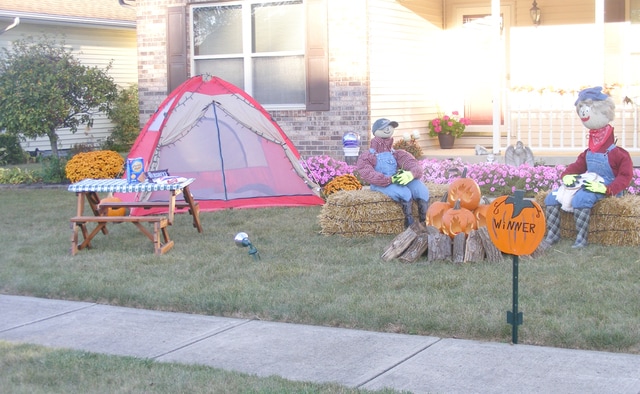 BRADFORD — Sisters Mandy (Bazill) Miller and Megan (Bazill) Hunt decorated their mother’s property at 512 Patty in Bradford, and entered it into the 87th annual Bradford Pumpkin Show’s Property and Decorating Contest. And, it won in the category as well as being named the People’s Choice award winner.

Their entry was among those who followed the theme, “What I Did Last Summer.”

The sisters will be receiving $187 for the category award and $87 for being named for the People’s Choice.

Judging of 25-plus properties took place Sunday night. “Celebrate the Harvest” was the other theme in which decorators had a choice to use in their decorating schemes. Four businesses also competed, while the rest were residences.

Three vehicles took the six judges to all of the sites. April Brubaker drove one vehicle carrying mother and daughter judges Naomi Yount and April Yount; Fred Curry operated another vehicle which carried Drs. Jennifer Stevens and Rob Maher; and Grover Curry drove the car in which Brenda Shively and this reporter rode.

Visitors were also invited to check out the entries Sunday evening during the judging; thus, there was lots of traffic. The visitors were told they could pick up a map of showing all the entrants and to enjoy cider and doughnuts sponsored by the Pumpkin Show.

The names of all the non-winners were thrown into a random drawing, with Bill and Judy Favorite of 415 Stichter receiving $87.

Committee members of the contest are Glenna Curry, Rita Leis and April Brubaker.

The extravaganza of lights may be viewed this whole week during the Bradford Pumpkin Show, which closes Saturday evening.