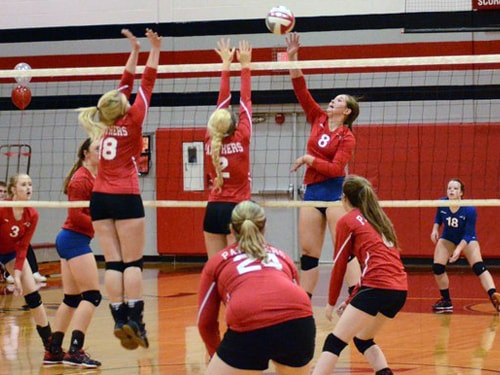 LEWISBURG – The visiting Tri-Village volleyball team played the role of spoiler – if only for one night – as the Patriots dominated Tri-County North on its senior night in straight sets (25-18, 25-17, 25-15).

The Panthers stayed on their heels all night long, but the Patriots outlasted them

It did not take long for the Patriots to start pulling ahead in the first set. The game was tied at 5-all, and then they went on a 7-2 run to gain some breathing room.

Tri-Village was on fire and energetic when North took a time out to try and stem the momentum. North made a run of its own to close the gap, but the Patriots regrouped and surged ahead for the first win.

North made its best effort on the second match. Again the Panthers tied at 8-all, but again the Patriots made a run after feeling the pressure from the Panthers.

North gamely tried to catch up but could not pull even with the Patriots. The Panthers’ second line seemed to have problems digging out the spikes from the Patriots.

And in the last set the Patriots had their way, racing out to a 6-0 start and at one point it was a 21-11 game. Then the Patriots played even with them from there on for an easy three-set win.

It was a win that the Patriots needed, coming off of losses last week against Northwestern and Yellow

Springs. Next they play National Trail at home, and the win gives them some momentum going into a game against an evenly matched Cross County Conference rival. This next week the Patriots will enter the state tournament. They will play the winner of Lehman Catholic and Mississinawa Valley on Oct. 22.

“We knew it was going to be senior night, and we knew that they were going to be fired up,” said Tri-Village coach Eric Burkhart, who has no seniors on his team. “They have some good hitters on their front line. But we came out ready play – and we showed up tonight. We’ve been trying to get more kills this season, and I thought that we did a good job of that tonight. We were able to find the holes and get the kills. Our serve receive was on target, too.”

Tri-Village is ready for its last regular season match against Trail at home on Thursday.

“It should be a good matchup,” Burkhart said. “I feel that we are about equal. They are a scrappy team, too, and I feel that it will go to five sets – we are planning for that.”