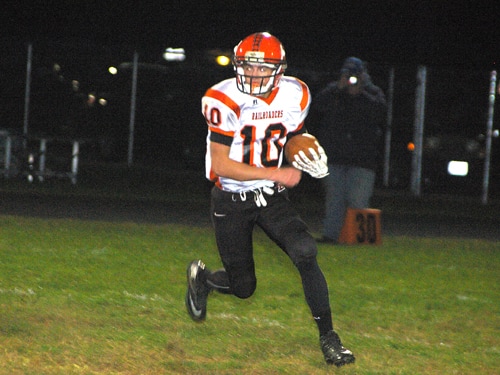 MANCHESTER – Bradford won its third consecutive game and improved to .500 with its first road victory since Oct. 26, 2012, in a 36-20 win at Manchester on Friday night.

The Railroaders went into halftime tied 14-14 with the Greyhounds before dominating the second half to secure their fourth victory of the season.

“We went into halftime, and they were a little uptight,” Bradford football coach Nathan Hyatt said. “And we talked about, gosh, let’s just go out there and let’s have fun playing football. And they played so well in the second half. And I’m so proud of these guys. I mean, it was just awesome. It was awesome.”

For Bradford, which didn’t even have a varsity football team last year, the game showed how far the Railroaders have come over the past few seasons.

“I’ve never seen a team happier,” senior Tyler Gunter said. “This team has grown a lot, grown a lot. It’s just really great to be at 4-4.”

The game didn’t start great for Bradford as Manchester scored on its opening drive of the night to go up 6-0, which proved to be the Greyhounds only lead of the game.

“That’s like kind of becoming a Bradford Railroader tradition – dig yourself a little bit of a hole and go to work and get better,” Hyatt said. “But we’re going to get better at that I’m sure.”

Bradford then turned the ball over on its first possession with an interception before settling in.

After allowing Manchester to drive to its 25-yard line, Bradford got a defensive stop and forced a turnover on downs.

The Railroaders then went to the ground with Mason Justice, Bryson Canan and Andy Branson combining to run for 75 yards in nine plays to tie the game with 30 seconds left in the opening quarter. Branson scored the tying touchdown on an 11-yard run, but Bradford couldn’t convert on a two-point conversion to keep the score knotted at 6-6.

After the score, the Railroaders got aggressive and went for an onside kick, which they recovered at the Manchester 38-yard line.

Moments later on the first play of the second quarter Gunter busted free for a 32-yard run, and one play later he scored on a 3-yard run to give Bradford a 12-6 lead. Bradford continued to go to Gunter, who converted the two-point conversion run to make it 14-6.

Holding a lead for the first time in the game, Bradford again went for an onside kick and again recovered it, giving the Railroaders possession at the Manchester 43.

Bradford couldn’t convert this time, though, as a fumble squashed the visitors’ momentum.

After forcing a three-and-out, Bradford again turned the ball over with an interception. This time Manchester capitalized and went 49 yards in 11 plays with the Greyhounds scoring on a 4-yard run.

Bradford stopped the subsequent two-point conversion attempt, but a facemask penalty gave Manchester another try. This time the Greyhounds converted and tied the game at 14-14 with 1:13 left in the half.

Bradford got the ball to start the second half and put together a nine-play, 63-yard scoring drive with Justice running 13 yards for the go-ahead score.

After getting a defensive stop, Bradford again got its offense going. This time the Railroaders covered 85 yards in six plays with Gunter scoring on a 14-yard run on the first play of the fourth quarter. Gunter also ran for a two-point conversion, and the score stood at 28-14.

After Adam Rostkowski intercepted a Manchester pass, Bradford’s offense again went to work and drove 81 yards in four plays with Canan scoring the touchdown. Branson added a two-point conversion run, and the Railroaders led 36-14 with 7:47 remaining in the fourth quarter.

Manchester got the game’s final score with 6:59 remaining as Bradford tipped a pass in the end zone that fell into a Greyhound player’s hands to make it 36-20.

A few minutes later Bradford’s Brandon Mitchell recovered a Manchester fumble that squashed the Greyhounds final hopes of a comeback and giving the Railroaders the 36-20 win.

“In the second half they kind of put it all together, and a light went off,” Hyatt said of his team. “It was awesome.”

With Friday night’s victory Bradford improved to 4-4 and kept its playoff hopes alive while Manchester fell to 1-7. Bradford will travel north on Saturday to face Fairview, who is 2-6 and coming off a 28-14 win against Holgate.