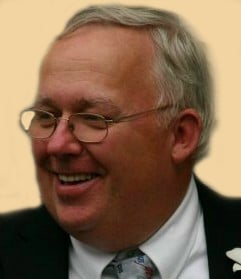 I once heard an illustration where the speaker compared how we should look at life to looking through the windshield of a car. Ninety-five percent of the surface of the windshield is for looking forward; five percent, the rear view mirror, is for looking behind you. Throughout life, we should be looking forward to what lies ahead while periodically looking back; remembering our past.

Since my last column, I have experienced another birthday. It’s interesting how we see birthdays as time passes. As a child, often a birthday is associated with a party and new toys. As we get older, we tend to celebrate birthdays, but we want to forget them. Examples of this would be a person dreading hitting thirty or forty, or telling people they are twenty-nine when in reality they are thirty-one. Then we come to a time of life when our birthday is more for other people. To us, it is just another day, but those who love us, show their love for us by giving us gifts, cake and ice cream. Don’t get me wrong, as we get older we cherish time with friends and family, but if no one planned anything for our birthday, we wouldn’t think twice about it.

My last few birthdays have been reflective; part of the five percent I look into the rearview mirror.

After salvation, God works in our lives. Sometimes, He is working in us to be more like Him and sometimes He is working through us to reach someone else (Revelation 3:19; Ephesians 1:19, 2:8-10).

As I looked into the rearview mirror, I could see God working in all events, large and small in my life.

The most significant event of my life before salvation was the death of my sister. She had leukemia, but only knew she had it for thirteen days. Her death, at age twenty-six (I was fifteen), was a shock to all of us. Brenda was a Christian and had told me the gospel on many occasions, but it was pretty much in one ear and out the other.

She had given me a Bible years before, and I dug it out of a box in the closet a few days after she died. I started reading. Over the course of a few weeks, I read through to the middle of Exodus but eventually stopped. It was boring.

Ten weeks after her passing Brenda’s Pastor stopped by the house. With him was a local celebrity. He had been a star basketball player at a nearby college. I had seen him play and knew who he was the instant I saw him get out of the car. We spent an hour talking about basketball. Then he asked me, “What are you doing tonight?”

My only thought was, “He wants to go shoot some hoops!” I told him I wasn’t doing anything. He said he was an evangelist now and asked if I wanted to go to church.

I gave every excuse I could think of, and they had a response for all of them. Being only fifteen, I couldn’t drive, but they had already had someone in mind to come get me.

I ended up going to church that night for no more reason than that I was polite. I wasn’t going to stand there and tell him, “I don’t want to go.”

The ways God worked in my life are numerous in leading me to salvation. My dad gave me a love of sports. This love of sports gave me something in common with the man God would use to preach the sermon that would bring me to the Saviour. God made me good at sports. I had played basketball and the possibility of “shooting some hoops” with a star college player was greatly desired, not something I would have shied away from. He also gave me parents that taught me to be polite. Honestly, I had run out of reasons on why I could not go that night. Because I was a good kid and did

not talk back to adults, I went to church that evening. Brenda’s death had me thinking about death, God, eternity and things like that; which also played a factor.

The polite thing may have more to do with my salvation than I previously thought. The sermon that night was on Acts 26:28 where King Agrippa says, “Almost thou persuadest me to be a Christian.” The preacher talked about people who were almost Christians. People who are nice, who a generous; teens who are the All-American boy or girl; he described me to a tee.

I was a good kid, a very good kid, but I did not know Jesus as my Saviour. I was lost. After that night, I was lost no longer. God worked every day of my life to bring me to the day of salvation. He is doing or has done, the same with you.