DARKE COUNTY — The battles will be in the townships this November, while some villages found it difficult to find anyone willing to take leadership roles — and in Greenville, there will be no decisions to make.

In Greenville, Michael C. Bowers will be running unopposed to retain his seat as mayor, as will Auditor Roxanne Willman and Law Director Eric Brand.

Doris Howdieshell is stepping up to run unopposed for the Second Ward seat being vacated by Roy Harrison, and Stephen M. Willman will be a write-in candidate for the Fourth Ward seat now held by John Baumgardner.

Rick Lee is running unopposed for the mayoral seat being vacated by Gerald A. Koverman. Council members Danny Brown and Jeff Gariety are both running without opposition to retain their seats.

Arcanum Mayor Judith Foureman will be retaining her seat without opposition, as will Councilman Eric VanHoose. Vanessa A. Delk is not seeking reelection to her council seat, and there were no other filers.

Castine Mayor Mary E. Brown is not seeking reelection, and William C. Collins Jr. is taking her place on the ballot. Jennifer Gabbard has not sought reelection, and no one filed to fill either her seat or the vacancy now on council.

Jason D. Lane, mayor of Gettysburg, will retain his seat without opposition. Two council seats are being vacated by Chris Miller and Patsy Riley, with no one throwing a hat in the ring to fill them. Two positions also are coming open on the Board of Public Affairs, member John Dillon and Timothy Rue reach the end of their terms. No one has filed to run for the positions.

Mayor of Gordon John A. Gross is running unopposed to retain his position. Two council seats are being left by Mary Foland and Elaine Johnson. Only Angela D. Gauvey has filed to run for council.

No one filed in Hollansburg to run for any of the positions coming open. Leaving at the end of their current terms are Mayor Dana Heck, Clerk Treasurer Tamara R. Wilcox, and Councillors Phil Eshbaugh and Joy Weatherly.

In the village of Ithaca, continuing in their current roles will be Mayor David H. Peterson, and council members Robert Brown and Richard Hoover.

Lisa L. Garland was the only candidate to file to fill the seat being vacated by Mayor Steven D. Eadler. Karl King has registered to run for council, for one of two seats being vacated by Angela D. Ballard and Michael Johnson.

In New Weston, Brad Birt will remain mayor. Don Selhorst and Brian Walls will not seek reelection to council, and no one filed to fill the seats.

There are no candidates for the mayor position, currently held by Cory Griesdorn, or either council position, held by David Barga and Jason Stammen, being vacated.

No one is running in Osgood, either. The mayoral position held by Steven Winner, and two council seats held by Ronald L. Brunswick and Ronald Lange will reach the end of their terms in December.

Palestine Mayor David A. Brewer has filed to stay on, but two council members, James Rutherford and Jill Schepis, will not run, and no one has filed for their positions.

Pitsburg Mayor Michael Wolf stays on the ballot unopposed, as do council members Chip Heindl and Phyllis A. Riegle.

Danny Howe filed to retain his position as Rossburg’s mayor, with no opposition. Two council seats are being vacated by Phillip Stutz and Steve Miller, with no candidates.

Union City Mayor Scott Stahl will not seek reelection, and current council member Zachary Pruitt was the only person certified to run for the job. Pruitt’s council term ends in 2017.

Two council seats are up for election in November. Bradley Horsley has filed to keep his seat, while Meta Sue Livingston has not.

Wayne Lakes Mayor Gary Lee Young will stay on, Clerk-Treasurer Tammy Barger is not seeking reelection, and no one filed for the job. Rita Sue Robinett filed to keep her seat on council, and the seat to be vacated by Michael Bland has no names on the ballot.

Kenneth A. Subler will retain his seat as mayor of Yorkshire without opposition on the ballot. Two seats on council, being vacated by Steve Mangen and Scott Pfledderer, have no candidates filed.

Adams Township Trustee Dave W. Brewer will return unopposed to his seat, while Charity Hutt was the sole applicant for the fiscal officer position being vacated by E. Scott Crist.

Chris Mestemaker will return unopposed to his seat on Allen Township’s Board of Trustees, while Neal J. Siefring seeks to retain the seat to which he was appointed, which expires in 2017. Patricia J. Kaiser will return as fiscal officer.

Ed Huff Jr. will retain his seat on the Brown Township Board of Trustees with no opposition. Fiscal Officer Linda J. Wood will not return, and candidates Beverly Grillot and Mary K. Riffle will vie to take her place.

Butler Township Trustee Thomas Hans will return to his position, as will Fiscal Officer Melissa Sullenbarger. No other candidates filed.

Incumbent Franklin Township Trustee Kim A. Myers will have opposition on the ballot, with Adam Besecker also filed to run for the seat. Caleena Hesler has filed to take the place of Fiscal Officer Bonnie Feitshans.

Jeremy Edger, Matthew Kolb and Geoff Surber all will vie for the Greenville Township Trustee seat being vacated by Bill Kelly. Fiscal Officer Susan T. Miles will return unopposed to the position to which she was appointed.

In Harrison Township, Michael Fisherback will return unopposed to his trustee seat, while Russ Bennett and Robert A. Godown will vie for an unexpired term through 2017.Cathy Mikesell returns unopposed to the fiscal officer position.

Eric J. Barga has filed to fill the seat of Mississinawa Township Trustee Roger Fortkamp, for which he is not seeking reelection. Sherry L. Dirksen will return unopposed as fiscal officer.

Mark A. Cox is seeking reelection to his trustee position in Washington Township. He is unopposed. Tony Feurer seeks to replace Fiscal Officer Janet Feurer.

Clyde Bateman and Kent A. James return unopposed to their seats on the Darke County ESC, as will Larry L. Besecker and Caroline Schmidt.

Three seats are on the ballot for Ansonia School Board. Running are incumbents Eugene F. Mayo, Don Moyers and Theresa Siefring, against challengers Ron Barga II and Joey Schmitmeyer. Clarence A. Kammer will continue the term to which he was appointed.

Incumbents Beverly Delk, Tracy Fout and Mark S. Trask will return to Arcanum Board of Education.

Three seats are up for grabs on Franklin-Monroe’s School Board. Seeking to fill them are incumbent Dean T. Thompson and challengers Amanda L. Morris, Alexander Staton and Teresa Wolf. An unexpired term will come up, with Claudette Cool Diceanu and Rick L. Filbrun seeking the seat.

Fred Matix and Jim Sommer will return to Greenville’s school board.

Three seats are coming open on Mississinawa’s school board. No candidates have filed.

Tim M. Bevins and Kevin R. Harrison will return to their seat on the Tri-Village Local Board of Education.

Hope Batty is registered to run for one of two full-term seats coming up on the Versailles School Board. Ron Gehret and Steven E. Ruhenkamp are unopposed in their unexpired terms. 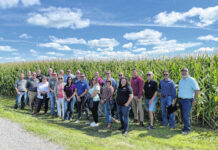