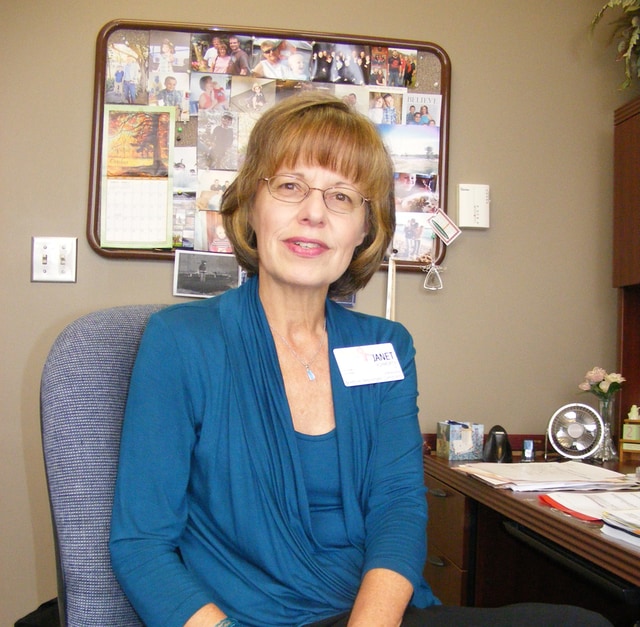 GREENVILLE — Janet Ashworth was the guest speaker at the recent golf outing which benefited the Cancer Association of Darke County, and spoke first-hand on breast cancer, which has affected her life and which is the subject of an annual campaign to increase awareness each October.

Ashworth, who shared her cancer journey at the outing, said she was diagnosed with ductile carcinoma stage 1 breast cancer in September 2012.

She said she got her hope from Jeremiah 29:11 and her courage from Isaiah 43.

“And, I researched everything I could find trying to educate myself to make the best medical decisions available and choose the right doctors for me,” said Ashworth. “I thought I was in good health. How could I get a cancer diagnosis? At that point, I had a history of eating healthy food, exercising regularly and getting my yearly mammograms. I do think these things contributed to the positive outcome of my journey.”

“The doctors usually steer you in that direction,” said Ashworth, coordinator of volunteers and a 25-year employee of Brethren Retirement Community. “Ask questions. You are your own advocate.”

Yes, her cancer was found through a routine mammogram.

“I had no symptoms; I was faithful about mammograms every year,” said the former Janet Cloyd. “One day I was fine; the next day I got a telephone call. My lump was small and would not have been found by an exam or by staff reviewing the X-rays, but was found by the high tech mammogram equipment. I had lots of encouragement from friends, family and wonderful mentors. I adopted the attitude, ‘If I had this journey ahead of me — I would go through it the best that I could and rely on God to journey with me.’ I adopted the attitude that ‘Life is not the way it’s supposed to be….it’s the way it is. The way we cope with it is what makes the difference.’”

She went on to say, “I am relatively a quiet person. For me to share my story is out of my comfort zone but the biggest thing for me would be to pray. I don’t feel I’m lucky. I don’t believe in luck. I feel I’m blessed. I believe I took the road where I’d be headed. God isn’t done here with me yet.”

Ashworth said she did the routine medical route….had surgery in October, started chemo in December and radiation in April.

“Following the biopsy, I chose to come back to Greenville for my lumpectomy by Dr. McKellar,” she said. “He did not find any involvement with my lymph nodes but I moved to a grade 3 cancer. I was informed that I would now have three months of chemo followed by eight weeks of radiation.”

Since the new cancer center in Greenville wasn’t available, she saw her oncologist, Dr. Sabiers and took her treatment mostly at Good Sam North.

“During my infusions of chemo, I experienced many of the cancer side effects you have heard about—fatigue, weakness, upset taste buds, loss of hair, loss of nails, mouth sores, emotional swings, insomnia and more,” she said. “I would think of others who I knew or saw during my treatments and how much more they were dealing with than my own side effects….the co-worker and her eight years of dealing with cancer; the 4-year-old granddaughter of a male resident, who would share pictures of her as she lost her hair about the same time as me and shared stories about how she was trying to cope and understand cancer at the age of 4; those at the treatment center coming in wheelchairs when I could walk; and my 40-year-old cousin who passed with breast cancer, leaving five children, just a few months before I was diagnosed. These things would remind me to be joyful in my circumstances. My sleepless nights, my emotional down times, the side effects could all pale in comparison when I would consider others’ journeys.”

Ashworth, who has three sons and a grandchild, said following her next to last infusion, her reaction was more severe.

“My right hand swelled about two times its normal size and turned the loveliest shade of red, pink and purple,” she recalled. “My husband named it ‘The Purple Claw.’ I was told by my oncologist that my skin was letting us know that my body had all the chemo it could handle, so it was coming out through the skin on my hand. I pleaded to have the last treatment so we could be sure, but that didn’t change his mind. No more chemo for me.”

Then, she said it was off to radiation.

“It ended up being a piece of cake for me compared to my chemo,” she said. “I did have to call my three sons and let them know I was getting tattoos….something I had always preached to them not to do. So here I was, getting my radiation markers. Did I have side effects? Yes, fatigue, radiation burns, rashes and more.”

With the chemo and radiation behind her, Ashworth said she was on to recovery and return to her normal self….so she thought.

“I had to accept my ‘new normal’ and the fact that even though I did everything I thought medically needed done, I would still have a post-cancer body,” she said. “I was very blessed to continue my job during my surgery, treatment and recovery. I only missed six days. Brethren Retirement is a great place to work and they were very supportive.”

The 1971 Westmont High School graduate also reported that, during her journey, her family and friends showered her with cards, flowers, food, gifts, words of encouragement and prayer.

“My sister made me cute hats to wear to work; the cancer association provided me with a wig and caps to keep my head warm; and my parents always had flowers waiting for me when I returned home from my chemo treatments….what a joy for me,” she said. “I made the comment to my husband, Mark, that it felt like I was able to enjoy my living funeral with all the little things people did to encourage me. I had some wonderful mentors…those friends who had walked the walk before me and took me under their wing. They blessed me with their kindness and encouragement.”

She said she was also surprised by the number of women who would seek her out or residents at work who came to her office and share their stories and offer encouragement.

“Several times I would stop by the Cancer Association office and whine or share something I had read with Chris and her staff,” she said. “They always had a smile and words of encouragement for me. I also had a number of men who shared concern about my journey. My wonderful husband was my number-one support and strength through all the icky stuff. He chose to support my decisions and be there with me and for me. At the end of all my treatments, he planned a wonderful California vacation to celebrate being ‘done’ and our 40th wedding anniversary. I am so blessed.”

She went on, “Where am I now? My mentors were correct in advising me it would take about a year for my body to recover. What I didn’t expect was some of the lasting changes that I would now experience. Currently, I am taking the five-year pill, an ace inhibitor that is supposed to help keep the cancer at bay and from returning. For me, this medication has been a challenge. It has a list of 20 side effects; I wrestle with 12.”

Ashworth said she is back doing research on this medication and its side effects and happened onto a grain-free diet to reduce the arthritic-type side effects she is experiencing in her joints and muscles.

“That was very successful for six months; now I’m once again being plagued with the arthritic symptoms and doing research,” she said. “I tell my doctors and Chris that those side effects cramp my style and are not acceptable.”

She said she got through her recovery via notes she plastered up wherever she was.

“They remind me to keep my mind on important things,” she said. “Slow down and appreciate the little things they would say.”

She also told the crowd that day of the golf outing, “Cancer diagnosis is tough; treatment is tough. I don’t want you to look at me tonight and think any of it is a picnic. But in all, I am blessed and choose to make the best of the days God gives me.”