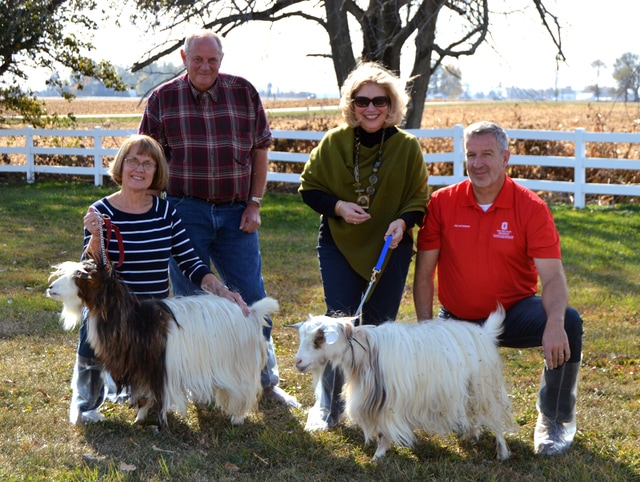 DARKE COUNTY — When considering the topic of “agriculture” in Darke County, it’s natural to think crops — corn, soybeans, wheat — or livestock, like cows, pigs and chickens.

A little-known secret, however, is that there are unusual agricultural products being grown and raised right here in this portion of West Central Ohio, curiosities that fall outside what is considered “the norm.”

Larry and Judy Baker, owners of Baker Livestock, south of Greenville, are preparing 25 of these curiosities — in this instance, Miniature Silky Fainting goats — for export to the Middle East.

Also referred to as “mini silkies,” Miniature Silky Fainting goats are a rare variety, specially bred to be small and docile. They sport long hair and come in a variety of colors. From a distance, I think, they could be mistaken for a small sheepdog. The goats have a lifespan of 15 to 18 years.

On a sunny, windy Wednesday, four of us visited Bill Funderburg’s farm in rural Darke County, where the Bakers are renting space to keep the mini silkies. Among this group is Sam Custer of the OSU Darke County Extension Office, Darke County Chamber of Commerce President Sharon Deschambeau, and Christina Chalmers, editor of The Daily Advocate.

Chalmers is on location to take pictures. Custer is present to offer his perspective on agriculture in the county. Deschambeau is on hand to present the Bakers with “Certificates of Origin.”

Regardless of their official reasons, everyone is there to take a look at these unique, and yes, I’ll say it, “cute” goats.

Certificates, such as the ones the Chamber issues, are vital in the export business, according to Larry.

“Documentation is very important to foreign buyers,” he said. “The thing with foreign countries is, they always say ‘We want to buy your best.’”

Deschambeau says that the Chamber issues the certificates for all sorts of products, agricultural or otherwise.

“Chambers of Commerce are asked to stamp and sign documents called certificates of origin,” she says. “These certificates are prepared by exporting companies (or their agents, known as freight forwarders) to show where their products were made.

“For the Darke County Chamber, the key task is not to find where the products were made, but to check that the documents are correctly completed, the certificate of origin matches the commercial invoice, and the document is signed by a designated person from the exporter,” Deschambeau added.

The 25 Miniature Silky Fainting goats housed in the barn are slated to be flown to Kuwait, via Chicago and Frankfurt, Germany.

The mini silkies have already experienced some travel. Nineteen of the goats came from Michigan, while six originated in Virginia. Before being exported overseas, however, the goats must undergo a battery of disease testing administered by the Ohio Department of Agriculture, including blood draws and treatment for internal and external parasites. They are held in near-quarantine conditions for up to 30 days before getting the “all clear” signal from the government.

Once allowed to travel, the goats will be transported in a holding area in Chicago to be observed by USDA inspectors for five hours.

Even past this point, the goats must travel under very specific, and strict, circumstances. Their crates must be wrapped in a fine, wire mesh, ostensibly to avoid bites by flies or mosquitoes. Caretakers on the flights, however, will open the enclosures to feed and water the animals. During their time in Frankfurt, Germany, the goats will be examined by inspectors with the European Union (EU), which has very stringent guidelines on the transport of animals crossing its borders.

Larry said there are a multitude of things that can go wrong in transit.

“Mechanical delays, flight delays, problems during inspection — you name it,” he said. “And the inspectors have to be there until the wheels go up in the airplane.”

If given approval by the EU, the goats will then be allowed to fly on to their final destination.

“These will likely be sold as companion animals,” said Larry. “People there treat them like pets. And it’s not poor people who own them.”

Perhaps an understatement. Merely transporting the 25 goats from Ohio to Kuwait carries a $25,000 price tag — $1,000 a head. This doesn’t include the price paid by the buyer for the goats themselves.

The Bakers are no strangers to the international market for livestock. Not only do they handle exports of their own, they help others across the country with their bookings.

“Animal export really is a small industry,” he says. “Everybody knows everybody.”

The Baker’s business duties are seemingly well-defined. Larry calls himself “the outdoors guy.” Judy, his wife, is the “indoors” person.

“Judy’s the glue behind this whole mess,” says Larry. “She takes care of all the paperwork.”

In 1992, the Bakers were awarded the Darke County Chamber of Commerce’s Agriculture Achievement Award, for their demonstrated extensive participation, leadership and support of agriculture as producers actively involved in the agriculture production chain.

Larry, by his count, has traveled to 36 different countries across the globe over the past 25 years, delivering cows, hogs, goats, sheep, and rabbits, not to mention more exotic animals such snakes, lizards, frogs and even white-tail deer.

Is the export of animals such as mini silkies from Darke County an anomaly? Not so much, according to OSU’s Custer.

“Ohio is in the top 10 among exporters of agricultural products in the United States,” he said. “Corn, beans, pork, beef, embryos, semen, cattle, hogs, eggs — are all exported.”

“Ohio’s number-one ag export product is soybeans. China is the biggest buyer. The local prices of products are greatly affected by demand, primarily with China and the population base they have,” he continued.

Ohio alone exported more than $1.2 billion worth of soybeans in 2014, with the vast majority shipped to China.

The Bakers invited the visitors, each issued protective plastic coverings for their shoes, into the barn to see the goats. One pen holds the males, the billys; another, the females, the nannys. Larry reaches into a bag of animal crackers and the goats come forward to eat the treat right out of his hand. Deschambeau and Chalmers also feed the mini silkies the snack. Unlike the stereotypical goats often depicted in television and film, the noise level in the barn is remarkably quiet.

Larry and Judy bring out two goats to have their pictures taken — “Trilleum,” an all-white nanny, and “Peppa,” a brown and white nanny.

The two goats traipse along, seemingly at ease among the spectators, with no signs either will faint, something they can do if scared into a panic. Both are leashed, but it seems unnecessary — neither looks likely to make a break for freedom in the freshly plowed cornfields surrounding the property. Peppa, in typical goat fashion, grabs a fallen leaf off the ground and begins munching on it.

Chalmers asked Larry, “Why do you do this?”

“Because I’m not in my right mind,” he replied, laughing.

As funny as his answer was, Custer suggested the Bakers had a way with talking to people and figuring things out which made him good in this line of business.

After the mini silkies depart, more adventures await. Larry will next travel to Vietnam to present an educational seminar. No goats, or any other four-legged creatures of which they are aware, will be traveling with them.

For more about this breed of goat, visit the Miniature Silky Fainting Goat Association at msfgaregistry.org.