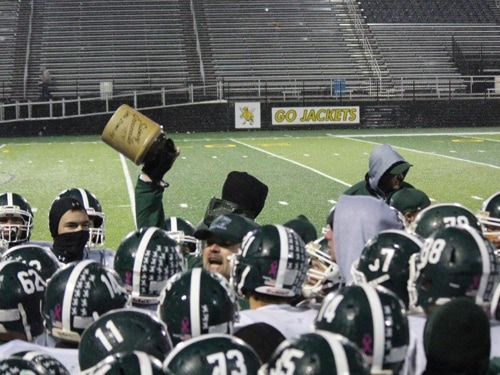 GREENVILLE – Greenville will try to retain possession of the Little Brown Jug on Friday night, a trophy that celebrates the more than 100 years of Greenville-Sidney football history but was lost for decades.

Greenville possesses the Little Brown Jug having beaten Sidney 50-33 in 2013 and 30-13 in 2014. Prior to that Sidney had the Jug for having won the teams’ meeting 38-0 in 2012, a match up that resumed the trophy battle after a 41-year break that included the Little Brown Jug going missing for more than 30 years.

The football rivalry between Greenville and Sidney dates back to 1899 and included annual Thanksgiving Day games from 1925-31, according to Sidney historian Dave Ross.

The Jug resurfaced in 2005 when the school building next to Sidney’s old Julia Lamb Stadium was slated for demolition. Following an auction at the school, brothers Charlie and Larry Cable discovered the Little Brown Jug in an old home economics classroom that also served as a press box for football games. Larry bought the Jug for $12 and kept it at his home for two years until Ross convinced him to donate it back to the school, where it was displayed in a trophy case until the Greenville-Sidney rivalry resumed when Greenville joined the Greater Western Ohio Conference.

Sidney won the Little Brown Jug when the trophy game resumed in 2012, but Greenville retook possession on Nov. 1, 2013, with a win against the Yellow Jackets. The Green Wave kept the trophy with a win last year and now will try to retain possession with a victory Friday night.