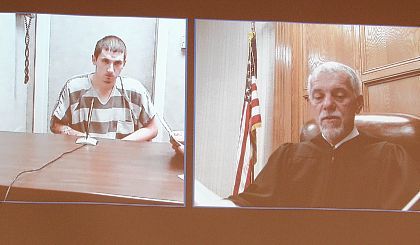 GREENVILLE — Bond was set at $100,000 for the suspect in the Family Dollar robbery that occurred Oct. 28.

Shayne Coleman Rayburn, 24, of Greenville, appeared via video link from the jail in Darke County Common Pleas Court Tuesday for arraignment on a charge of aggravated robbery, a first-degree felony, with a firearm specification.

Because of the seriousness of the charge against Rayburn and the fact that he was arrested with heroin and drug paraphernalia on his person, the state recommended a bond of $100,000.

Acknowledging his ongoing drug problems, when asked to comment on bond on his own behalf, Rayburn replied, “It’s probably better that I stay in here, to be honest.”

Also appearing in court Tuesday was Brian D. Burk, to enter a change of plea.

Burk, who had been charged with two counts of felonious assault, entered a plea of guilty to an amended charge of two counts of attempted vehicular assault, felonies of the fifth degree. The state dismissed a third count.

The amended charge carries a maximum of 12 months in prison and $2,500 in fines per count, plus a mandatory license suspension of one to five years. Both the prosecution and defense recommended a presentence investigation for the defendant, who has no criminal record, and both requested driving privileges be granted.

Sentencing for Burk was set for Dec. 14 at 1 p.m. His own recognizance bond was continued.

Simms is charged with possession of methamphetamine and illegal conveyance of prohibited items into a detention facility. The charges have a maximum penalty of three years each and $10,000 in fines each, plus a mandatory license suspension. He entered a not guilty plea on both counts, and a $50,000 bond was continued.

Hines is charged with possession of heroin, a fifth-degree felony, with a maximum penalty of 12 months in prison and $2,500 in fines, as well as a mandatory license suspension. He entered a not guilty plea, and his $20,000 bond was continued.

Boner is charged with trespass, with a maximum penalty of 18 months in prison and $5,000 in fines. He was given an own recognizance bond with a no contact order, and David Rohrer was appointed as his attorney.

Hartman is charged with possession of heroin, which carries a maximum penalty of 12 months in prison and a $2,500 fine, plus a mandatory license suspension of six months to five years. He was given an own recognizance bond and ordered to get an attorney.